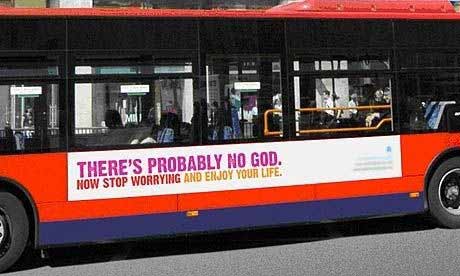 Photo from The Guardian, used without permission
A few months ago, I wrote an article about the form advertising takes in public spaces (particularly public trasit spaces), and posed the question of how far is too far with advertising media. A similar controversy has come up recently in England, except it's not the form of public-transit advertising that is at issue: It's the content.

It's called the Atheist Bus Campaign, and it started when Ariane Sherine mentioned, almost in passing, her consternation with a London-based JesusSaid.org-sponsored bus poster campaign that had Biblical quotations such as "When the son of man comes, will he find faith on the earth?" in a blog post on The Guardian's web site. Sherine wrote a convincing argument (check it out, I recommend reading her post), and the gist is largely summed up in the following paragraph:

"Now, if I wanted to run a bus ad saying "Beware – there is a giant lion from London Zoo on the loose!" or "The 'bits' in orange juice aren't orange but plastic – don't drink them or you'll die!" I think I might be asked to show my working and back up my claims. But apparently you don't need evidence to run an ad suggesting we'll all face the ire of the son of man when he comes, then link to a website advocating endless pain for atheists."

Sherine suggested that "if there are 4,680 atheists reading this and we all contribute £5, it's possible that we can fund a much-needed atheist London bus ad with the slogan: 'There's probably no God. Now stop worrying and get on with your life.'" The response was great, including plenty of celebrity donations to the campaign, and after a London-based launch of the campaign, it moved nationwide throughout England last week. And it hasn't been without backlash; according to The Guardian, the British Advertising Standards Authority has received almost 150 complaints regarding the Atheist Bus Campaign.

Whatever your stance on the issues surrounding this particular controversy, it raises a very interesting debate about personal expression (particularly religious expression) in public spaces, and whether it has a place. OC Transpo has had some Christian advertisements, but they haven't been as aggressive as the JesusSaid.org campaign, and haven't prompted any notable public backlash.

What do you think: How far is too far with advertising content?

ADDENDUM (Jan. 17, 2009): The Atheist Bus Campaign was deemed "too far" in Rome, after receiving stron opposition from Conservative political powers, according to a report in the Globe and Mail:

ROME — Italian atheists have lost a bid to run “no God” advertisements on city buses after strong opposition from conservative political parties, a member of the group said on Saturday.

The ads reading “The bad news is that God doesn't exist. The good news is that you don't need him” were to have been put on buses in the northern city of Genoa, home to the Catholic cardinal who is head of the Italian Bishops Conference.

The mock-up was ready and the contract was sent to the group for signing but the publicity agency changed its mind and said the ad could not run it because it violated an ethics in advertising code, according to Giorgio Villella of The Italian Union of Atheists and Rationalist Agnostics (UAAR).

Posted by Peter Raaymakers at 11:24 AM

I do wish people of various religions provided the same courtesy when dealing with atheists, which is unfortunately often not the case.

I'm happy to see both sides buy transit ads, as long as they don't violate hate laws. More money to pay for public transit is a good thing!

Ads are, sadly, part of our public discourse. In a lot of ways, they're the only way an organization can reach a large portion of the population. As long as an ad avoids violating hate laws, is polite, and is relatively truthful, it's fair.

As to atheist bus ads: about time.

It won't do anything to change the minds of hardcore believers, but it will help people who really don't believe that their view is shared by a lot of people.

How do we get the message accross to city council that we want these atheist ads and that there are many of us, non-believers, who would like to have a voice?
Anyone starting a petition? If so, please provide a link where we can join up.