Scenes from the strike: Parliament Hill rally to "end the strike" 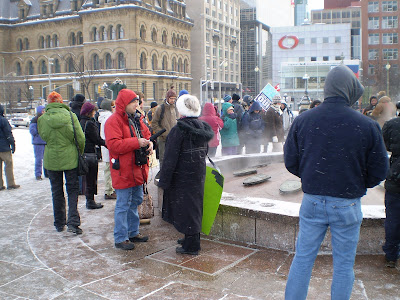 "End the Strike! Now!"
A few dozen people gathered on Parliament Hill around noon today to call out both sides of the transit labour dispute -- ATU 279 and the City -- for allowing the ongoing strike to last too long.

It was a diverse crowd. People held signs calling for OC Transpo to be deemed an essential service and demanding that the service be privatized. Capital ward councillor Clive Doucet made an appearance. One attendee (pictured, above centre) even held a "Coalition YES" sign, perhaps performing double duty on the Hill given today's other fairly significant event.

The rally, though fairly small, attracted the attention of plenty of local media who sampled the crowd's opinions for about 30 minutes. CTV's Vanessa Lee spoke with event organizer Catherine Gardner. 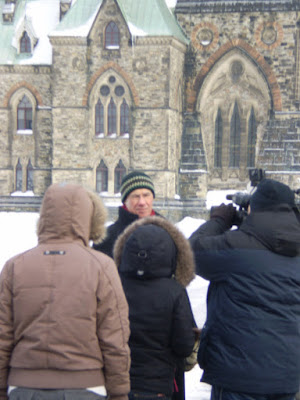 What happens when the press files stories in real time....

"In a Monday-morning press conference, before he met with the mayor, Mr. O'Brien said he was open to changing the rules to cover OC Transpo drivers, but doing so would require consultations and research and could take months."

errr, you mean Baird, not O'Brien said that, didn't you?

Doucet's never met a camera he didn't like, has he.

It's always disappointing when these events happen in the middle of a work day. I would have loved to have come out, but guess what? I work! It's a pity, because I would love to have shown my support.