The Confederation Line: Elegant, but not extravagant 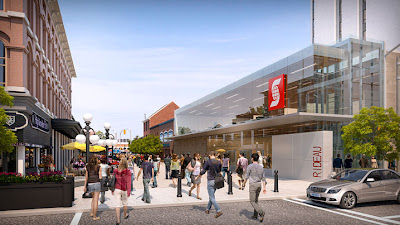 Today in the Ottawa Citizen, a local resident published a letter on the city's Confederation Line transit plan. The letter, written by Mr. Roderick Taylor in response to a previous article about praise councillors heaped on train station "starchitect" Richard Brisbin during the penultimate approval vote, contained some good points but, in my opinion, was off the mark.

Since the letter likely contains opinions shared by others, I decided to respond directly to the comments made. I've tried to do so respectfully, and mean no offence to the letter-writer--his opinions differ from mine, but remain valid. Feel free to respond to my responses in the comments below.

In their infatuation with station concepts, one is left with the impression that many on city council have forgotten that the most important criterion by far when considering the suitability of a transit project is not the elegance of its stations, but whether the plan itself makes rational sense from a transit planning perspective.

This "most important criterion" is certainly true, and planners who emphasise transit stations at the expense of the plan itself fail to see the forest through the trees. But I don't believe that's the case here; the transit plan was the first step, and has been heavily researched by staff, architects, planners, and others. Only once the plan was in place were the stations designed, and they have been designed very well.

I also think that the opposite of what Taylor is saying is true: Even the most sensible transit plan will be limited in its effectiveness if it's not something people will want to ride. Comfort is a huge factor in building effective public transit, and well-designed stations can transform the area around them, moving from transit hubs to lifestyle hubs. Will that happen in Ottawa? It could, if fostered well through planning decisions and local input. Without good transit stations, though, it almost certainly would not happen.


The foreshortened light-rail line ending at Tunney's and Blair (without, in all likelihood, the prospect of the necessary financing from senior levels of government for line extensions for the foreseeable future) will simply inconvenience legions of transit riders with time-consuming transfers at those points, and at Hurdman, and actually discourage transit ridership. It does not make rational sense.

The uncertainty of funding eastern, western, and southern extensions of the Confederation Line is a real issue, and it does surround the plan with questions. However, massive and long-term city-building projects like this one will always have huge question marks; if cities were to wait for all of those questions to be answered, nothing would ever get done except extremely small projects.

(It's also worth noting that the federal government's budgetary projections have them slated to ink a surplus in 2016-17, the year before this phase of Confederation Line will be finished, and--by extension--in advance of commencement of the rail extensions towards the suburbs. While these projections may seem as reliable as a crystal ball, they're the best we have at the moment. The province is another story, obviously, but the city has five years to lobby their federal and provincial partners to get supportive funding for the transit plan's next stages.)

Transfers are regularly cited as a deterrent, but that's not always the case; transfers are a necessary component of most transit systems, and they can actually make trips faster in certain circumstances. The key to avoid discouraging riders is to make the transfer points comfortable and to make the transfer times short. Comfort was discussed above, and trains in the system can run as frequently as every 1:45; that's pretty frequent. Transit systems that are effective for both user and taxpayer are virtually impossible without transfers, but systems with transfers can be designed to remain responsible to both groups of stakeholders. This system, by all accounts, does that.


LRT stations that may end up rivalling the Taj Mahal in their magnificence do not alter that stark reality.

This obvious hyperbole doesn't help the argument here, but the opinion that these stations are overly ornate may be a common opinion, but it simply isn't the case. Sure, compared to the existing OC Transpo bus stations/hamster cages, they're "magnificent," but compared to stations in other cities (Moscow; Almaty, Kazakhstan; Stockholm; these cities), they're fairly simple: It looks like there is a lot of glass, smooth finishes of metal and ceramic, natural wood, and open spaces. The stations are modern and minimalist, but look like they'll stand the test of time and will also be cost-effective.


There are other, more sensible and cost-effective ways of alleviating downtown bus congestion problems, such as supplementing the existing bus transitway system with a regional/local rail service using existing rail lines, which would be far more convenient and attractive for the travelling public.

Although I agree that leveraging existing rail lines to complement our existing public transit infrastructure is an idea worth investigating, I fail to see how it would alleviate downtown bus congestion--which is the most pressing issue for OC Transpo; the system has hit its capacity downtown, particularly around the Mackenzie King Station, and there is no longer room to run more buses there. Since supplemental rail lines would fail to serve most of the city's major destinations (the downtown business district, the University of Ottawa, Tunney's Pasture, etc.), it would not solve the underlying problems that have motivated the construction of the Confederation Line. The best they could do is transport people to either Bayview Station or Train Station, which would still require use of the Confederation Line itself.


Council and staff should be pursuing these options, not an exorbitantly expensive transit white elephant with dazzling stops en route.

Obviously, Taylor's point is laid bare in this conclusion: The plan itself is flawed, and not even the most beautiful transit stations would compensate for those flaws. But he says the plan is exorbitantly expensive, which it isn't; it's expensive, but the costs are controlled through a fixed-cost contract, they're in line with other similar projects, and funding has been earmarked from start to finish. He also says it's a white elephant, which it won't be; Ottawa is a resilient transit market (even a 53-day transit strike barely made a dent in ridership), and this line will serve a greater capacity of riders heading to the same destinations at least as quickly as they're being served already (likely more quickly), and in more comfortable surroundings.

There will be dazzling stops en route, granted, but they won't be ostentatious. They'll be cost-effective, and should fit in nicely with the new Ottawa aesthetic, alongside the Art Gallery, the re-designed Museum of Nature, the Ottawa Convention Centre, and the new Lansdowne Park.
Posted by Peter Raaymakers at 11:30 AM 14 comments

The Confederation Line: Can it really be happening? 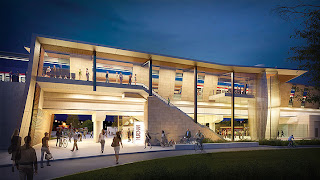 Things actually seem to be moving along quite well for Ottawa's light-rail transit system, now officially christened The Confederation Line.

The Rideau Transit Group was recommended as the project team for the construction of the 12.5 km light-rail line, and yesterday the city released a huge presentation and unveiled the latest station designs. If you haven't seen them yet, you should definitely go look now at ottawalightrail.ca. They're truly amazing.

From a personal perspective, this marks a milestone moment for me. Leading up to this point, I've tried to hold back my enthusiasm for the project--past experiences with similar projects had likely left many in Ottawa cynical about the prospect of this highly ambitious, $2.1B mega-project actually moving forward. But now, upon seeing these designs, reading up on the project team, and looking at the recommendation in detail, I'm finally going to allow myself to get excited about light-rail in Ottawa.

There are certainly flaws in the project, and I wouldn't dare suggest that everything is perfect. There also remain many unanswered questions about Phase 1 as well as the implementation of future phases. And considering how late in the process the O-Train extension project was cancelled, there's still a possibility (however slight) that this thing could go sideways.

But for now, I'm going to stick with optimism and excitement and see what happens.

Now, if you'll excuse me, I'm going to flip through this station design slideshow once again...
Posted by Peter Raaymakers at 1:01 PM 3 comments