Where does public transit fit in the upcoming election?

The City of Ottawa will go to the polls to elect its next mayor on October 25, 2010. Nine candidates have come forward so far (Cesar Bello, Alex Cullen, Mike Maguire, Stanley Pioro, Sean Ryan, Jane Scharf, Charlie Taylor, Jim Watson, Samuel Wright, with current mayor Larry O'Brien non-committal), but it looks like a two-horse race between Alex Cullen and Jim Watson so far.
Given the C.V.'s of these two candidates, one must expect public transit would figure high on the list of election issues this year: Cullen is currently chair of the city's Transit Committee, while Watson (who in January resigned his position as provincial minister of municipal affairs and housing) has been openly uncertain, if not flat-out critical, of the city's current light-rail transit plan.
There's still plenty of time left in the campaign, but little has been said so far about OC Transpo and public transit in general in the city. I'm looking forward to hearing the plans of, and hopefully talking to, the city's mayoral candidates.
Posted by Peter Raaymakers at 7:00 AM 1 comments 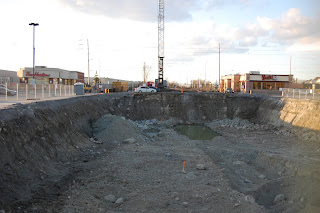 Took a walk around the current construction of the Southwest Transitway Extension, which includes a tunnel underneath Strandherd Avenue heading into the Barrhaven Marketplace. I've updated a few photos on the Transit Ottawa Flickr account; the one above is looking northwest towards the Strandherd Park'n'Ride. 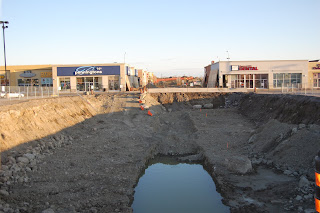 A look the other way around, to the southeast, where there will (eventually) be a new transit hub at the southern endpoint of the Transitway.
I'll try and post some more photos of other parts of the project in the coming week.
Posted by Peter Raaymakers at 7:00 AM 5 comments

Creative ways to call out stops

Calling out the stops along OC Transpo bus routes has been a hot topic in Ottawa recently, made hotter by the $12,500 fine the city was assessed for failing to do so, as directed by the Canadian Transportation Authority (CTA). The city has voted to have automated stop-calling technology installed on its fleet, but that process will take some time; in the meantime, operators are expected to call out the stops themselves.

With 60-foot buses and sometimes dozens of riders to worry about, calling out stops isn't always at the front of operators' minds, but one driver in particular has found an ingenious way to get stops called automatically--apparently, there's an app for that.
From Centretown News:

A Centretown News reporter riding the 9 Hurdman noticed a robotic female voice calling out stops. When asked for a demonstration, the male driver pressed a button on his iPhone. The mechanical voice said “Vanier and Coventry.”

What a simple, effective solution to a problem that the city's spent almost two and a half years trying to solve--the CTA handed down their decision in November 2007, informing the City of Ottawa that not having 100% of stops called out posed an undue obstacle to the visually impaired, and that they would have to ensure that stops were called out. In the last few months, council finally decided on a $12M bus retrofit program to have stop-calling technology, among other upgrades installed on the fleet.
Having an iPhone call out stops may not have been a long-term solution for the issue at hand. But at least it was a solution.
UPDATE: JCL commented on this post offering some videos of another clever device one operator used to have stops called out on his or her bus: an mp3 player with the station names loaded in. Below is a video with a few stops being called out.

Posted by Peter Raaymakers at 7:00 AM 5 comments