If you're interested in municipal issues and city building, few books offer an overview as quickly and effectively as does Witold Rybczynski's Makeshift Metropolis: Ideas About Cities. The depth of Rybczynski's work belies the short length of the very accessible book (just 199 pages), and is definitely worth a read while you're riding around town.
Rybczynski examines the theories of many thinkers at the forefront of urbanism, especially Jane Jacobs and Lewis Mumford, but also Charles Mulford Robinson, Ebenezer Howard, and Le Corbusier. With the benefit of retrospect in many instances, the author looks at where the ideas of these thinkers have worked in contemporary cities, and where they haven't.
There are many issues facing cities today, and in the latter parts of the book Rybczynski looks at where cities might need to go in the future to remain places people can and will want to live. The answer, in the mind of the author, is density. Not necessarily hyperdensity, as with cities like New York City and Hong Kong (although there are lessons to be learned from those examples), but simply an increased density compared to what is seen in most cities today. This is particularly important in Ottawa, where a relatively low population density offers ample opportunity for the city to develop within the city without needing to move out of it--an obvious reason why City Council has worked hard to limit and altogether avoid expanding the urban boundary.
In the end, Rybczynski concludes that good planning makes good cities, citing the Israeli city of Modi'in as proof. But rather than designing every detail of the city, Rybczynski calls for macro-planning, allowing for organic growth over time under parameters set forth. It's not the hyper-planned city of Le Corbusier, nor the anarchistic city of Jacobs, but something in between.
Posted by Peter Raaymakers at 7:00 AM 1 comments

Much was discussed on last Wednesday's Transit Commission meeting including the recent route changes/cuts/optimization, MacKenzie King Bridge congestion, and Presto smart cards. Here is the recap of that meeting (most of the information is referred to David Reevely's Twitter feed):
Posted by Wes Chu at 7:00 AM 1 comments 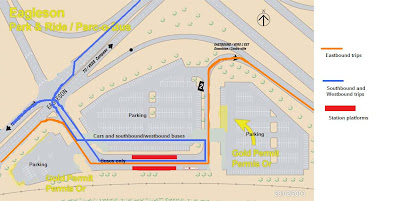 The bottom line is something needs to be done, and quickly. Lives could be at stake.
Posted by Peter Raaymakers at 7:00 AM 6 comments

Just a heads-up to OC Transpo users that, if you somehow haven't heard, very many routes are changing under the city's optimization project, and yours might be affected. The changes take effect today.

If you're not sure whether or not you're ride will change, check the OC Transpo website and find out.
Posted by Peter Raaymakers at 7:00 AM 7 comments