What's to come with the Richmond Underground: Cleary Station

It's at least a decade away, but the City of Ottawa is planning to build on the light-rail line currently under construction to extend it from Tunney's Pasture westward towards Lincoln Fields before turning south and heading to Baseline Station (although I've heard rumours that there may be a movement afoot to change the Transportation Master Plan in the near future in order to connect Bayshore Station to the LRT line in this second phase of the project). This past summer, the city decided they'd be moving forward with what's called the Richmond Underground route, which combines a shallow trench along the Parkway with a tunnel underneath Richmond Road (-ish) into a redesigned Lincoln Fields station.

What interests me most about the Richmond Underground proposal are the two new stations that would be incorporated into it, Cleary Station in McKellar Park and New Orchard Station in the Woodroffe North. Neither of these communities are currently served by high-speed transit; the current Transitway has a massive service gap between Dominion Station and Lincoln Fields. Although residents of the McKellar Park and Woodroffe are connected to the main Transitway by the 2 and the 87, the fact that the Transitway passed right by them without stopping them is a pretty huge missed opportunity. Richmond Underground addresses that service gap with two new stations, each of which has a relatively strong catchment area of existing residential development.

The easternmost of these new stations is Cleary Station, which is--appropriately--at the intersection of Cleary Avenue and Richmond Road. There's a strip mall on one side of Cleary (it's unclear whether or not that strip mall will stay... ) as well as the Charlesfort Continental condominium building on the other side. To the south are some low-rise apartment buildings and then some single-family homes. Westbound trains will proceed through the shallow trench towards Cleary Station, at which point they'll head underground into the Richmond tunnel.

A little while back, I went by the place where the station's going to be located to check it out (and take some photos). Below is a conceptual image of the line when viewed from the Parkway towards the west; in it, you can see the Continental condo in the background. You'll also notice just the top of the train is visible because the vehicle is inside the trench.

And here's a photo of that general area, but slightly closer to where the station itself is going to be. 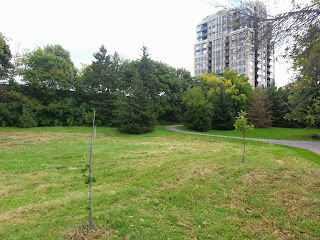 Up next is a photo taken from the western side of Cleary Avenue towards the east, roughly where the station itself will be (you can see the back corner of the strip mall at the right of the image). It's tough to imagine a transit station, but... this is roughly where it's going to be. 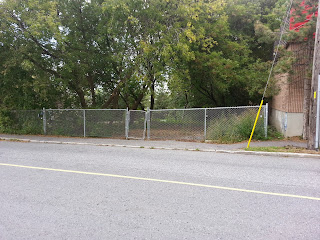 A couple more concept images of Cleary were made available by the city; if I had to, I'd guess this first one is taken from about the fourth floor of the Charlesfort condo looking east across Cleary Avenue and along the trench. The van that's randomly parked outside the station is in roughly the same spot as the fence in the above image.

Finally, a pretty typical concept image of the station from Cleary Avenue itself.

Although the city has made promises to restrict intensification around Cleary and New Orchard stations, the population density around them is already pretty strong; certainly enough to justify adding in these two new stops.

In the near future, I'll publish some photos of the area around where New Orchard Station will be later in the week.
Posted by Peter Raaymakers at 7:00 AM 3 comments 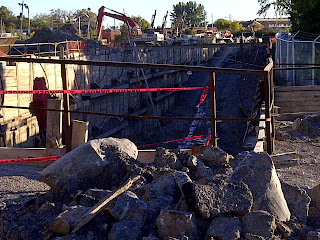 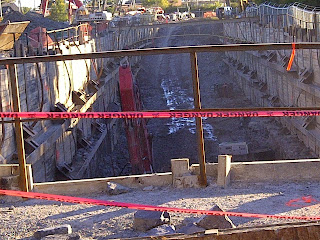 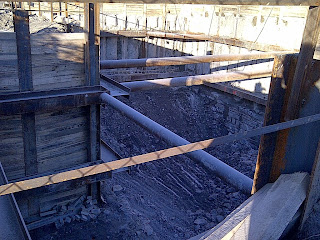 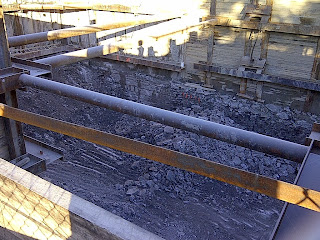 Posted by Peter Raaymakers at 7:00 AM 2 comments 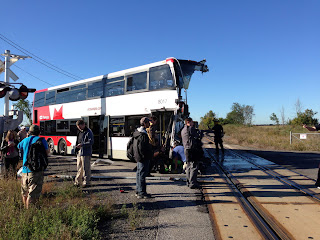 Just before 8:50 on Wednesday morning, a northbound OC Transpo double-decker bus collided with a VIA Rail train along Woodroffe Avenue near the Fallowfield transit station. The collision left the front corner of the bus shorn clean off. Six of those on the bus were killed by the collision, five declared deceased at the site and a sixth who perished after arriving at hospital. Among the dead was ten-year veteran OC Transpo bus driver Dave Woodard, who may be remembered as one of several operators who volunteered their time to shuttle disabled residents around the city during the 2008-09 OC Transpo strike. Over 30 other passengers from the bus were treated for injuries in hospital, but thankfully none of those on the VIA Rail train suffered any injuries.

While this description coldly offers the grim details of the tragic incident, it fails to capture much else about it--including the emotion that took over the City of Ottawa. The collision has left residents across the city shocked and feeling vulnerable to a degree that isn't typical of our usually sleepy town.

I found out about the incident while standing on a 95 riding through downtown. There was a young woman sitting beside me, talking on the phone and crying. A lot. It was obviously a personal matter, but I couldn't help but overhear snippets of her conversation; things like, "... the driver may be dead... " and, "... my brother was on the bus." That last word made me fear it was more than a car accident, so I checked Twitter on my phone; sure enough, the initial reports had begun flooding in from all the local news sources. As often as I could I updated the nwsfeed, but sadly the news didn't improve--in fact, the details seemed to get more grim as they came in.

More information about what happened to cause this tragic incident will surely come in the days and weeks ahead. In the meantime, my thoughts are with the families of those who were killed or injured in Wednesday's collision. Thanks are due to the first responders and hospital staff whose quick and decisive work prevented this crash from becoming an even more horrifying one.

Thanks are also due to the bus drivers who get us to work and back every day. Their jobs aren't as easy as many assume, so they deserve our gratitude and respect--especially after an event like today's, which must have them as shaken as anyone else. So when you're getting on or off the bus this week, make sure you say thank you to the operator who got you where you needed to be. If you can, try to make a habit of doing it regularly; I'm going to.
Posted by Peter Raaymakers at 7:00 AM 4 comments

Last month I posted a question on Twitter asking people what the most annoying thing a fellow rider could do while on OC Transpo. It's part of my embryonic #CivilTransit project, a (probably misguided) project to inform people of just how irritating their behaviour can be in order to make the transit experience more enjoyable for everyone.

Responses to my Twitter poll included many things you'd expect. The most serious of infractions was harassment, an issue that's been in the news for some time and was mentioned by a few respondents. Less illegal (but still obnoxious) infractions included listening to music absurdly loud, blocking the aisle when there's room at the back, talking loudly on cell phones, back-door boarding on buses not equipped for it, putting feet on seats, and running after 95s in rush hour (you know, when the next one is no more than five minutes away).

Along a similar vein, New York City-based artist Nathan Pile recently released a bunch of fun, animated .GIF images that demonstrate "basic tips and etiquette" for visitors or residents of his place of residence. They're all funny, but the transit-related ones apply as well to Ottawa as they do to New York.

For instance, regarding your music: Here's a failsafe way to determine whether it's actually obnoxiously loud... 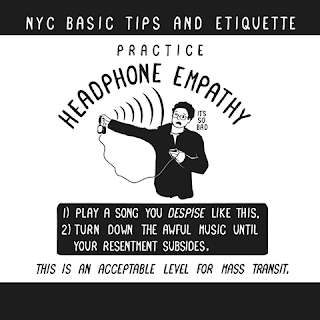 Also, something that I experienced recently, here's a way to determine if the food you're considering eating on the bus is inappropriate...

If you're not aware who the Courtesy Seating section is intended for, this should help...

And finally, here's a demonstration of how illogical it is to jump on the bus before allowing others to make their way off of it...

Shortly after publishing his cartoons on Imgur (here and here), Pyle got a call from a publisher asking to turn his tips into a book--which is scheduled for publication in April 2014. Hopefully his cartoons make people more aware of their surroundings on public transit.

Thanks once again to Jim Louter (who provided some of the photos in this post, too), here are a few photos of the western portal of the Confederation Line's downtown tunnel. They were taken on August 16, 2013.

First, a couple of shows of the view eastwards into the opening of the trench: 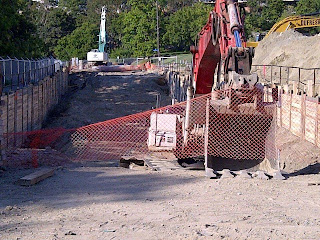 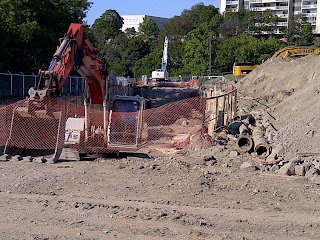 Second, the opposite view, looking wast over the opening: 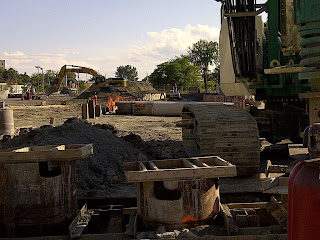 And finally, a look at the huge mounds of dirt that have been excavated: 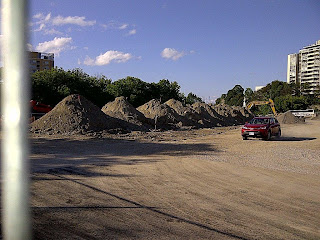 Thanks again to Jim for sending in the photos. I'll try to keep posting updates whenever I can, at least until the Confederation Line website starts updating (as it hopefully will).
Posted by Peter Raaymakers at 7:00 AM 3 comments