Between a rock and a hard place, the strike continues 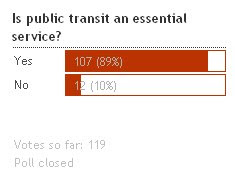 Going into the twenty-ninth day of the OC Transpo transit strike, both sides are looking at renewed mandates to stand firm in their demands. The City has the support of the vast majority of Ottawa residents, according to a poll, and, according to the Ottawa Citizen, have complete support within City Council.

All the while, the Amalgamated Transit Union (ATU) Local 279 has encouraged its members to vote down the City's most recent offer during a federally-mandated vote of members on Thursday, and union leadership is confident that members won't budge.

For the time being, then, it looks like Ottawa residents who rely on public transit are stuck paying the price for an irresistible force being applied to an immovable object. It may not be surprising that developments haven't happened, but it certainly is disappointing.

The most immediate possibility for a resolution is the vote on Thursday, so I won't presume that it will be a 'no' vote--it may, still, be a vote to accept the City's offer amongst the ATU members, many of whom have undoubtedly suffered without pay or benefits for more than four weeks.

Another possible resolution may come in the form of an investigation of the Canadian Industrial Relations Board (CIRB) into whether or not the transit strike poses "an immediate and serious danger to the safety or health of the public." If it does, the service could be deemed an essential one, and the ATU would be mandated back to work--at least to some degree.

An informal, completely non-scientific poll on this website had 89 per cent of voters stating that public transit is an essential service. That might be a reflection of our audience, but it's still an interesting result. If you believe that transit is an essential service, and you've got a good reason that meets the CIRB's criteria, then there are a few ways you can make your case:

Posted by Peter Raaymakers at 10:04 PM