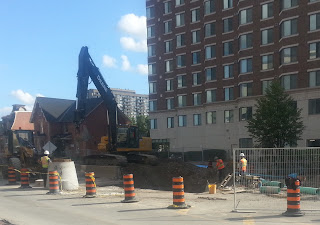 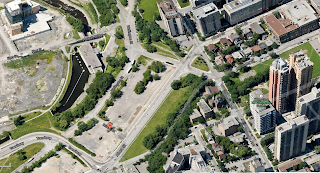 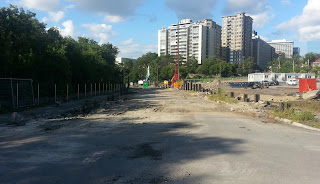 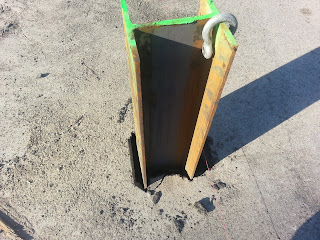 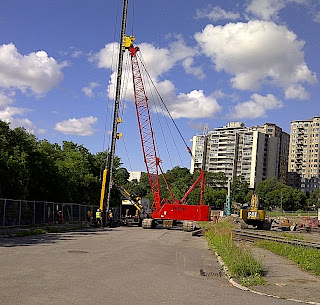 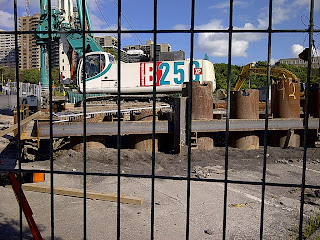 That's all I've got for today, but I'll try to have periodical updates with photos to show how the project is progressing (although it might be more difficult, as it appears the crew is putting in permanent fencing around a larger area of the site). If you've got photos you'd like to share, feel free to e-mail me (make sure to include the dates they were taken!) and I'll try to include them in future updates!
Posted by Peter Raaymakers at 7:00 AM 5 comments 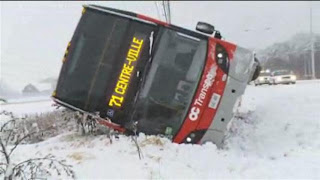 I'm curious: Are readers questioning the suitability of double-decker buses for Ottawa's transit needs?
Posted by Peter Raaymakers at 7:00 AM 5 comments

Although this is old news by now, the City of Ottawa is moving forward with the so-called "Richmond Underground" option as the western corridor of the city's new light-rail line. It's the second phase of the line, heading west from Tunney's Pasture Station towards Baseline Station.

Here's a brief video of the latest tweaks to the line, from the city:

Much has been made of the National Capital Commission's refusal to budge on light-rail on the Sir John A. MacDonald Parkway, and rightfully so; it's kind of a big deal. But the city seems convinced that their latest plans to bury most of the line in a deep trench should satisfy the NCC. The City has also said that to fully comply with what the NCC is asking for would cost an extra $180M, which isn't in the budget for the city.

Here's an image showing the route from Westboro to Lincoln Fields (click to enlarge); the remainder of the line will follow the existing Transitway infrastructure:

The addition of two new major transit stations, Cleary and New Orchard, is great; the huge distance between Dominion and Lincoln Fields without stops under the current Transitway system is a huge drawback. The catchment area for both stations is quite strong, as well, so it will offer residents of those areas hugely improved transit access.

Given that the first phase of the light-rail plan has just recently started construction, we're still a ways off from seeing this one running. Construction isn't even expected to begin until 2017 at the earliest, so there's still plenty of time for the city to gain the NCC's approval and gain some more community support.
Posted by Peter Raaymakers at 7:00 AM 2 comments 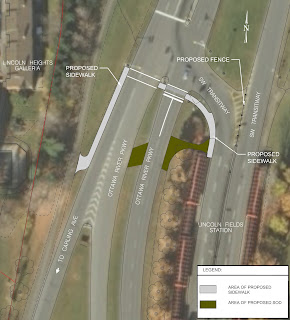 Lincoln Fields Station is a huge hub of Ottawa's western Transitway through which nearly all buses headed west travel. But it's also kind of isolated by roadways, hemmed in to the north by the Transitway, the west by the Sir John A. MacDonald Parkway, the east by a big field, and the south by Carling Avenue. It was never designed with pedestrians or cyclists in mind, and has used obstacles (mostly fences and barricades) to try and shepherd people along major detours in order to get anywhere.

For example: Someone headed westbound who wanted to go to the shopping centre would be forced to climb a set of stairs on the westbound platform, cross over the Transitway to the eastbound platform, cross over again to the local platform into the main station and then along to Carling Avenue--after which they're finally on an actual street, but no closer to the shopping centre itself than when they initially got off the bus. (Of course, many people simply take their chances running across the Parkway,  a pretty treacherous crossing during rush hour.)

Thankfully, though, that's changing, and the station will get slightly better from a walking perspective, as was confirmed earlier in the week by Bay Ward councillor Mark Taylor:

@rymkrs Yes you are! Took me a year to convince NCC. Also paved and plowed pathways down embankment to access new crosswalk.
— Mark Taylor (@Go_Taylor) July 24, 2013

As you can see in the image at the top of this post (thanks to Taylor for sending it), the NCC finally agreed to install a crosswalk on the Parkway where there's already a traffic light (installed for buses turning into the station) in order to provide a pedestrian crossing where people had been forced to make one themselves. (Note the sections where sod is to be placed in the image, which will cover the well-worn footpaths jaywalkers have established over years of crossing.) It's an overdue but still very sensible move to make, and will hopefully make pedestrian access to the major station at least a little bit safer.

The project is well on its way and, based on what I've seen there, should probably be completed within a couple of weeks.

Of course, there's a larger issue at stake here: The lack of initial consideration for pedestrian access to many transit stations in the first place, especially those near major roadways. It's an issue that caused a fatality two years back at the Eagleson Park and Ride, which was poorly designed for pedestrian access. Lincoln Fields is another station with poor accessibility, and the conventional response to it--installing physical obstructions to block pedestrians--is not sufficient to compensate for these errors. These obstructions rarely prevent pedestrians from crossing dangerous roadways, but almost always make those crossings more dangerous than they were originally.

If Ottawa is serious about encouraging people to walk, bike, and ride the bus, they need to ensure connectivity between those systems is possible--especially walking and using transit. If you make it easy for people to get to stations, you give them one less reason to avoid transit.
Posted by Peter Raaymakers at 3:20 PM 3 comments