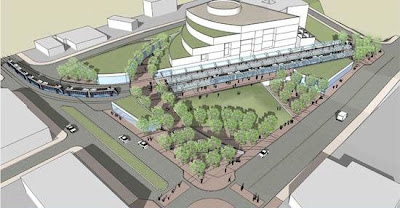 a station concept for Los Angeles' Expo line's downtown LRT station
Although we've seen a sneak peak of what Ottawa's underground light-rail stations might look like, it still remains to be seen what we might get for the stations at-grade, to the east and west of downtown. Back in May I took a look at a few transit stations in other cities, from the huge multi-modal station in San Francisco to a more humble--but still beautiful--bus station in Detroit. But since we're still years away from the construction of Ottawa's LRT stations, we haven't really seen much in the way of station designs.
The photo above is a concept drawing for LRT stations in Los Angeles, California (which I wrote about recently, too). As you can see, the station isn't just a station; it's within a larger building, part of the transit-oriented development planned for the site. And I'm sure I'm not the only one who thinks it's one nice looking LRT station.
Ottawa is a city with ample opportunity to work transit-oriented development into our transit plans. The federal government is always looking for more office space; maybe they'd be interested in further expanding to Ottawa's east end, around Cyrville or Blair Station?Residential development was barely hit by the 2008 recession in Ottawa, and condominiums are shooting up all over the city; would developers be interested in a partnership at Bayview Station? And we're the nations's capital; would the NCC consider adding the now-homeless National Portrait Gallery to LeBreton Flats, to complement the Canadian War Museum and make that station a year-round destination?
Maybe. All of the above are maybes. The NCC has indicated an interest in working with the city on LRT stations, and this seems like one area where cooperation might actually be possible, and would certainly be mutually beneficial.
Posted by Peter Raaymakers at 7:00 AM

Residential development was barely hit by the 2008 recession in Ottawa, and condominiums are shooting up all over the city; would developers be interested in a partnership at Bayview Station?

I really hope that you didn't just suggest putting a light rail station in a condo building. There's a very good reason you won't find something like that anywhere else in the world.

Hahaha, touché, anon@11:03. Perhaps not a station in Bayview, but nearby, perhaps with some covered connection to the station?

There's a very good reason you won't find something like that anywhere else in the world.

What is that reason?

I used to live in a highrise in Montreal that had access to the Metro from the lobby.

Granted, it was underground, but the platform was not very deep compared to most Metro stations.