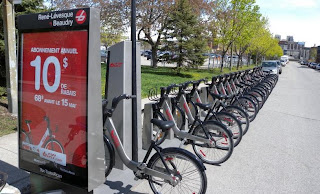 Last year, the National Capital Commission ran a successful pilot project with Montreal-based Bixi bicycles for a bike-rental service. The program found the service would be economically viable, but the NCC, who wanted the bikes to be available beginning in June, hasn't found a company to take on the contract to manage the service this year.
From CBC.ca:

However, officials say the terms of the proposed contract appear to have scared off bidders.

The NCC wanted the winning company to own the bicycles and locking stations, but companies didn't seem to want the financial risk of that kind of arrangement: No bike-sharing companies responded, including the Montreal company whose Bixi bicycles were used in the pilot project.

It's too bad the system has hit this snag. It gained a fair bit of momentum last year, and seemed rather popular with locals and tourists--one would expect that momentum to have carried into this year. Hopefully the problem can be resolved before all that momentum is lost, and the program has to start over from scratch.
Posted by Peter Raaymakers at 7:00 AM

The NCC should be embarrassed by this. Issuing an RFP with terms so bad that NONE of the potential suppliers were interested in? This makes them seem either out of touch, or arrogant.

I wonder who decided to put that term in.....

Interesting that it was economically viable in Ottawa. I didn't expect that. I see Bixis as mostly appealing to people who don't frequently commute by bicycle, and those people I would assume need physically separated bike lanes, like in Montreal, to feel safe on the road. My mistake, and I'm glad I assumed incorrectly.

NCC out of touch or arrogant? Say it isn't so!

Oh look — the national capital will get Bixi bikes after all!