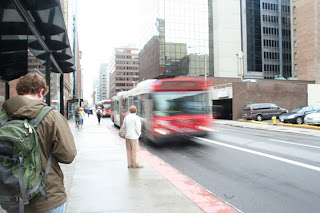 photo © Simon Cremer
Over the course of the 2010 Mayoral Election campaign, Public Transit in Ottawa will be sitting down with mayoral candidates, discussing their platforms and thoughts on transit in this city, and what they hope to achieve during their mandate, if elected mayor.

Next up is Charlie Taylor. A journalism student at Carleton University, Taylor, 33, has released a series of key platform ideas on his website, from "fiscal responsibility" to "citizen friendly government"--and, of course, public transit.
One of the short-term transit goals Taylor outlined on his platform was to kill the U-Pass, the universal student bus pass which, for $145 per semester, would give any full-time university students a bus pass. One of the key issues debated about the U-Pass as it went through council was an opt-out clause, but it wasn't approved; every full-time student will pay that $145 per semester. Although he said he didn't want this issue to define his campaign, Taylor suggested that the U-Pass is unfair to those students who choose to live close to their campus.

It’s a disincentive for people to make the environmentally-friendly choice to live within walking or cycling distance of school if you charge people a blanket fee. People opt to live close to school, it’s a little more expensive rent-wise, but they’re making that decision to have that lifestyle, and they can invest some of the money that they save in transit into their increased rent. I think that’s a totally legitimate decision, and charging people $300 a year as a tax to walk or cycle is unethical.

The U-Pass, which is valid for bus and O-Train transportation, was brought forth by the student federations of Carleton University and the University of Ottawa, and passed referendums at both schools. Still, Taylor questioned the validity of those student votes.
Posted by Peter Raaymakers at 7:00 AM

I live right next to the university of Ottawa and spend at least 300/year on bus tickets.. If I could have the freedom of a bus pass for the same investment I'd be thrilled.

This kid should probably keep his head down, but at least making outrageous statements will serve him well in his chosen profession.

Eric G. it is not freedom you're getting it is less burden because the cost is shifted on to all full-time students. There are no favours being given out here and no deal is being made. It is simply making the already financially vulnerable group of students pay when they have no need for the service.

Why don't you walk to school and/or ride a bike more often? It is all good for the brain, body, and spirit!

People who oppose the U-pass because of its effect on students who live close to school are ignoring the fact that students don't just go to school. They might work part-time, or have friends and family in other areas of town.

They also might like to go to the beach, or (gasp!) to a bar of some sort, somewhere.

@ RTWAP why do students who do not rely on the OC Transpo have to pay $300 a year to support other students that need to bus to school? Theres a quote called "Provide your own transportation" and I think the idea of supporting other students to get to their part time jobs or go out drinking is a more outrageous idea to even have the nerve to bring up. Students are paying for their education and educational experiences.. whether it be suppporting to sustain the athletics facility at carleton or keeping CUSA running. But to pay $300 a year to get other students TO school.. thats ridiculous.

As a U of O student, I am furioius with the U=Pass. I am at the law faculty and do not remember at all being asked to vote on this issue. Yes $300 gets slapped onto my already exorbant tuition fee to fund other people bus pass. i don't use the bus. I bike to school and otherwise own a car and pay monthly insurance on it. Can someone explain to me why in addition to my own transportaion expenses, it is a good thing that I am to anti in $300 to others transportation expenses as well?

Nice! thank you so much! Thank you for sharing. Your blog posts are more interesting and informative. We are also good
service provider click on below link to enjoy a splendid service in various location.