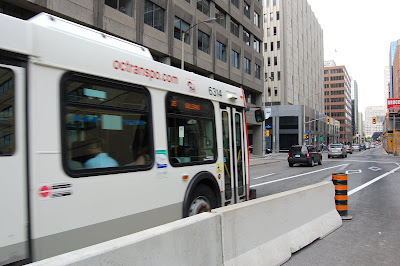 Over the course of the 2010 Mayoral Election campaign, Public Transit in Ottawa will be sitting down with mayoral candidates, discussing their platforms and thoughts on transit in this city, and what they hope to achieve during their mandate, if elected mayor.
Chief among mayoral candidate Charlie Taylor's concerns about the city's transit system are bus fares. Stating that Ottawa has the most expensive transit fares in Canada (note: Ottawa [$3.25] appears to have the second-highest regular cash fares among municipalities in Canada, ahead only of Gatineau [$3.30]), Taylor said there was only one way to address fares: To reduce costs.

"There are ways that we can reduce costs; for one thing, making the system run more efficiently. Right now, we’ve got direct buses going from particular suburbs going to downtown; a lot of them aren’t running at maximum capacity. They are a little more expensive, but on the same note, if you’ve got feeder buses going to a central depot and then you’ve got long-haul buses that are full of commuters. You make people do one transfer, but if you’ve got the buses running on a regular basis it shouldn’t be a significant inconvenience."

But Taylor also said that "you can’t address costs without addressing [bus operator] salaries", and suggested that the city needs to find a way to bring them down in order to find a long-term solution. In a city still tender after a 53-day bus strike, angering the operators' union doesn't seem like it would be a popular idea, but Taylor--a self-described "leftie"--thinks the union has become too powerful, and suggested privatization as a possible way to redress that.

"We want to work with the union. If the union doesn’t want to work with us, we want to privatize. Not privatize the operation; the city would still govern the routes, schedules, own the buses, all that; only the labour aspect would be privatized. Basically, companies would bid on the positions, so they say they could provide you a driver for $50,000 a year; we give them the $50,000 a year, and they would then contract a driver for $40,000 a year.

"It would be regrettable, because nobody’s a big fan of privatization. Well, some people are big fans of privatization, but I’m a big leftie. I believe in labour unions, I believe in the value of unions, and I believe in the values of organized labour. But once the union begins to act more as a special interest group, that’s working for the interests of this particular small, privileged group at the expense of the working class, then you have to re-evaluate what their value is. They’re basically a lobby group now, working for a privileged group of people. They’re not actually a labour union fighting for the working class. So if they don’t want to work with us, then we’re going to work without them. We can’t have everybody in the City of Ottawa held hostage and paying ridiculous transit fees."

I have plenty of potentially unpopular ideas on the subject of fares, so bear with me.

1) Eliminate tickets. What percentage of irregular riders actually pay 3.25, compared to those who pay 2.30?

2) Eliminate monthly passes. The convenience of only making one purchase per month is nice, but the savings aren't as good as some believe.

3) Eliminate student / senior fares. Many elderly riders already restrict their travel to Wednesdays and students have to go to school either way. You don't see discounts for students at McDonald's, so why grant them a cheaper rate for other daily expenses?

4) Eliminate single fares altogether. I propose that a roughly $5-6 day pass be the only fare available, giving commuters the option to pay for gas and parking, or pay for a bus ticket that expires at midnight. It's not like many people make one-way trips anyway, except those who try to avoid paying for the return trip by speeding up their shopping or those who get a ride home from work to avoid the second fare.


Of course none of these ideas could ever gain any traction, but by streamlining the revenues, you avoid some small costs, like distibution of tickets/passes.

The real issues are getting the real costs under control, like eliminating many of the redundant routes.