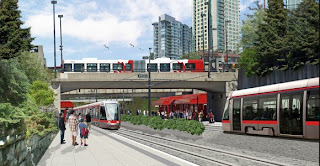 Ottawa is approaching a key moment in city building quickly, as we continue along the timeline towards construction of the $2.1B light-rail transit plan. Along the rail line from Tunney's Pasture to Blair Station, we'll see a good number of rail stations, including a few underground along the downtown tunnel. So if we're fairly certain we're going to see light-rail actually come to fruition, what will the rail stations look like?
Over on Spacing Ottawa on Tuesday, David McClelland took a look at the architecture in Ottawa's current public transit infrastructure, and discussed the merits of considering form as well as function in the design of our next big project. From the article:

"At the end of the day, let's not forget that transit is a fundamental element of public space in any big city, and that those spaces should be enjoyable and perhaps even iconic places to be in. Ottawa has traditionally shied away from truly impressive civic architecture, but the new LRT represents an excellent chance to change that philosophy. After all, it's not all that often that we start totally reconstructing our rapid transit system, so it would be tragic to let this opportunity slip by us."

So... will we get "more of the same", as McClelland put it, in the form of the red and glass and concrete hamster tubes serving as transit stations now, as seen in the topmost image?
Or maybe we'll get stations similar to those at the new Baseline Station: Aluminum supports and roofing around glass walls, which is a bit nicer looking than the red hamster cages, but could still become monotonous if implemented across the city.
A few months ago on West Side Action, Eric Darwin pondered what kind of stations we might get for our light-rail transit stations. He hoped for an instantly recognizable, dramatically designed station, similar to Detroit's Rosa Parks Transit Centre, as pictured below. It's a 25,700-square-foot transit hub that ties in the transit systems of Detroit and Windsor (hey, a station tying two different cities together? That sounds like something Ottawa could use... ). According to Arch Daily, the station had a budget of $22.5M in total; a lot for Ottawa to spend on each station, perhaps, but certainly reasonable for one or some of the largest hubs we'll have. 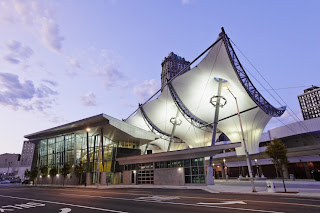 If we want to go crazy, look towards San Francisco for ideas on how to use our public transit infrastructure projects to bring life back into the downtown core. Below is a conceptual drawing from a few months back of a transit hub for the Bay Area, from Wired magazine: 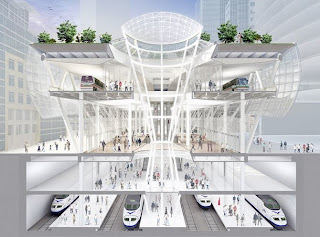 The $4.2B price tag San Francisco might move forward with is a little pricey, but Ottawa's doesn't have to be the size of San Francisco's; size isn't really the point here, anyway. Finding a way to integrate bus, rail, pedestrian, cycling, taxi, and even personal automobile transportation into a dynamic, functional hub would do a lot for downtown. And it would put Ottawa's transit system on the map.
Realistically, something between the existing hamster tube stations and the San Francisco Space Station is likely the best solution for the City of Ottawa. Finding a shoe that fits is the key to the process of finding a good design for our transit stations.
Posted by Peter Raaymakers at 7:00 AM

When it comes to transit, FUNCTION OVER FORM. Always.

The temporary Baseline station is a perfect example. The walk times are stupidly long, there's no mid-station crosswalk (OC Transpo puts much greater value on bus movement than passenger movement) and the wrong buses use the wrong stops. (95's use the far end stops, maximizing the likelihood of missed connections as you race to or from a connecting bus at the other end of the platform, hundreds of feet away.)

I've got to agree with you, at least to some degree, WJM. I'll never understand why the designers at Baseline decided to take the stations from the middle of the complex and move them to the outside, and have the buses through the middle--without any reasonable way to get from one side to another. The first time I saw it, the flaw occured to me right away. Not sure what the thinking was there...

I like the Montreal idea of having different architects designing different stations with different styles. The transit stations will probably be the most used public spaces in the city, so they shouldn’t be prefabricated and monotonous.
However, a lot will dependent on the amount of cash we’ll have too, so that could a problem. But if we move away from being an auto-centric city to a transit city, and spend less for the car infrastructure, we may have the money to do it.
How much percentage of the transportation budget is allocated for each mode these days?
Anyone knows?

With all due respect, I much rather have monotonous stations all over the city than a non-functional transit system. I think everyone in Ottawa will agree with me that the system is in dire need of a tune up. Why is it that it takes less time to get to get to down town Toronto from Oakville using the GO-train than to get to Ottawa from Orleans? Fix the system, build the thing, get the project off the ground! Then,if there is money left over (yeah right!) we can worry about the frilly stuff.

I agree with WJM. The new Baseline station sucks in terms of its location. Nowhere close to any street. The only people it's convenient for is people working at the City of Ottawa building.

If the new Tunney's looks anything like that picture from San Fran I'd eat my hat. I hope that as a terminus there is plenty of heated waiting areas for people taking buses to the west end.