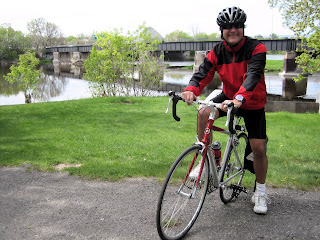 César Bello with his bike
Over the course of the 2010 Mayoral Election campaign, Public Transit in Ottawa will be sitting down with mayoral candidates, discussing their platforms and thoughts on transit in this city, and what they hope to achieve during their mandate, if elected mayor.
Another avid cyclist in the mayoral race, César Bello outlined an intention to encourage cycling as a form of transportation for citizens in his platform. Among the measures he proposed were increasing the number of bike paths around the city as well as initiating safety programs in schools, universities, and online.
Although Bello acknowledged that a growing city like Ottawa will need to invest in roads, he suggested some funds be redirected into investing into Ottawa's cycling infrastructure:

Eventually, this city will grow up; to say that we won’t build roads is a lie, because eventually we will be forced to do so. But also, we need to be more creative in order to move to cycling, with more safety [for cyclists].

In encouraging cycling, though, Bello feels that educating cyclists of the rules of the road is necessary--as is educating automobile drivers of their need to respect cyclists.

I understand that people who use their bicycles are afraid to get onto the road, and share with the car owners, but I believe it is a matter of education. Because I know there are some cyclists who don’t follow the rules that they have to follow, so education is a key. [...] And also, [we have] to educate the drivers to pay respect to the cyclists.

Bello suggested that these education programs could be run through schools, universities, and online through social media.
Posted by Peter Raaymakers at 1:00 PM