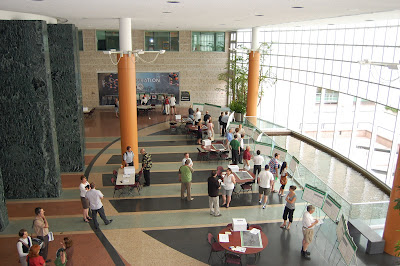 On Tuesday evening, I stopped in to the public consultation on the National Capital Commission (NCC)-led interprovincial transit study. Attended by about 30-40 people (at least when I was there, from 6-7 p.m.), the consultation represents the fourth step in the overall process, the results of which will help the strategy team come up with a recommendation for integration of the national capital region's transit infrastructure--in short, better connecting Gatineau with Ottawa through public transit.
The consultation had a number of posterboards (images of which you can download in .PDF form here) and forms for attendees to fill out offering their opinions on the options presented. The options were largely broken down in short-, medium-, and long-term objectives, and dealt with the superficial (common branding and signage standards; shared transit maps) to the practical (compatible or common 'smart' payment cards; coordinated transfer-point route scheduling) and into the technical aspects of the transit integration (bus rapid-transit versus light-rail transit; crossing the river to the east or west of downtown, or a loop with both; and so on). And, naturally, there were forms for attendee comments about any other aspects--including those not presented on the posterboards.
Although an interesting exploration of the different options for interprovincial transit, it's unclear what this study will achieve, beyond the recommendation of an integration strategy. Although the cities of Ottawa and Gatineau are participants in the process, as are OC Transpo and STO (the city's respective public transit agencies), it remains to be seen who might pay for any such project. Ottawa's tied up with the current LRT implementation, which--from the first phase, including the downtown tunnel, to the further three phases--will take decades to build. Still, even if it is a recommendation, that does give the cities a foundation on which to plan future transit construction on either side of the river.
If you missed Tuesday's open house, you have still got the opportunity to attend one on Wednesday, July 7, 2010 at Gatineau Maison du Citoyen from 5:30-8 p.m.
Posted by Peter Raaymakers at 7:00 AM