2010 Election: Bello on transit as an essential service 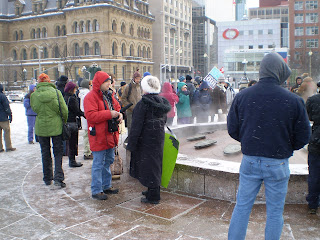 a rally during the 2008-09 transit strike
Over the course of the 2010 Mayoral Election campaign, Public Transit in Ottawa will be sitting down with mayoral candidates, discussing their platforms and thoughts on transit in this city, and what they hope to achieve during their mandate, if elected mayor.
César Bello is certainly a dark horse in the 2010 mayoral election in Ottawa. And although he has gotten little media coverage (aside from a feature in Metro, a quick note on Greater Ottawa is all I could find). And although his platform is difficult to navigate (one long web page with ideas interspersed with letters and scattered commentary), his passion was evident during our interview in early July 2010. And his passion was most evident when discussing the Winter 2008-09 transit strike.
Noting the struggles citizens went through during the transit strike, Bello was inspired to enter the mayoral race, and wants to make public transit an essential service if elected mayor.

Positively no more strikes, not here. [The strike] was so painful for the residents. That’s the reason I entered this race.

Bello doesn't think that an essential service designation would necessarily increase costs of transit, suggesting that Ottawa's transit costs--which are the highest in the province--are high because of poor administration, not a lack of money. (A past poll of Transit Ottawa readers showed huge support for an essential service designation, but both the transit operators' union and the city said there was no need for the designation.)
Posted by Peter Raaymakers at 1:00 PM