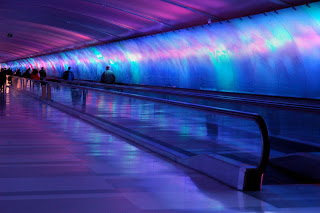 Last week,the online magazine Slate discussed the possibility of solving some urban transportation problems in North America's biggest cities with a long-established, but rarely acknowledged, for of transit: Moving sidewalks. Author Tom Vanderbilt, in his "Nimble Cities" series, suggested that while long-distance transportation is solved by technologies like airplanes, trains, buses, and automobiles, the shorter-haul runs haven't been addressed by them. Maybe moving sidewalks are a possible solution to that problem.
The moving walkways in most airports, as the Slate article outlined, would probably be of limited use in terms of urban transportation, because the cost would be hard to justify based on the actual speed of transportation. There are, however, high-speed moving walkways, which have a consistent surface composed of different sections, and people embark and disembark using variations of the on-ramps and off-ramps you'd use on a conventional highway, so there is a gradual buildup to the high speed. Wikipedia explains one such high-speed moving sidewalk, the Speedaway:

"The entrance to the system was like a very wide escalator, with broad metal tread plates of a parallelogram shape. After a short distance the tread plates were accelerated to one side, sliding past one another to form progressively into a narrower but faster moving track which travelled at almost a right-angle to the entry section. The passenger was accelerated through a parabolic path to a maximum design speed of 15 km/h (9 mph)."

At 15km/h, that's more than twice the average walking speed, and if commuters walked on the moving sidewalk, it would just add to the speed improvement over regular walking. It's not appropriate for long distances, and walking is fine for short distances, but it might be good for medium-length distances.
So where might this be good for Ottawa? I discussed the option of light-rail on Bank Street last week, but given the relatively short distance between Billings Bridge and downtown Ottawa (about 4 km, a 15-20 minute ride on a high-speed moving walkway) and the large number of small retail outlets and the well-established residential zones in behind much of the retail on Bank, it would likely be well-used. Or maybe along Wellington and Rideau Streets, running in front of Parliament Hill, over the Canal, past the Rideau Centre and the Westin and Lord Elgin Hotels would be a great draw for tourists looking to see the sights in Ottawa.
Obviously, though, there are huge question marks about moving sidewalks. First and foremost is the actual practicality, and the cost v. benefit analysis, but Slate does outline some others: maintenance costs and issues, and possible weather problems (although maybe a moving sidewalk could take care of its own snow removal?), not to mention the fact that walking from the bus, train, or car to work is some of the only excercise some people get. But it's still fun to think about.
Posted by Peter Raaymakers at 7:00 AM

What Ottawa needs is this and they need it now.

All talk no substance. Residence in Toronto complain about the same thing, but they are way ahead of Ottawa.

Per capita, more people are serviced by high-order transit in Toronto than in Ottawa (high-order meaning BRT, LRT or Subway).