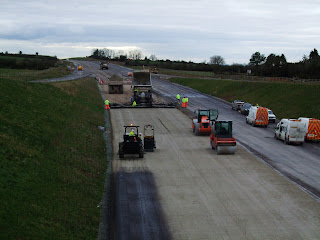 A few sources have recently spoken out about the City of Ottawa's plans to expand and add to roadways in the city, and instead re-direct that money to public transit and cycling infrastructure. The first is a report written by University of Ottawa political studies professor Matthew Paterson and released by Ecology Ottawa (which you can download in .PDF format here), proposed an outright moratorium on new road projects over the next 10 years, which would result in $1.5B cut from the budget (and, one would assume, significantly increase congestion on roadways in the city). From CBC.ca:

Mayoral candidates have also spoke out about the issue, coming on to either side of the debate. In the Ottawa Citizen, Clive Doucet suggested that the City of Ottawa is in need of a "road diet", and Alex Cullen has also said that expanded roadways are not the only, or even optimal, way to reduce congestion in the city's transportation system. Incumbent Larry O'Brien, however, noted that Ottawa's size makes new roadways necessary in order to allow people, especially in suburban and rural areas, to move about the city. Although not quoted in the Citizen's article, mayoral candidate César Bello has outlined "a halt to the steady growth of the city's road network" as part of his platform.
Halting new road construction would help the city encourage public transit use, and would be a stiff-armed way of forcing people to reconsider single-rider car commuter. But it's a difficult line to walk, given the fact that Ottawa's transit system already seems to be bursting at the seams. It will be interesting to see the shape that this discussion takes through the election campaign.
Posted by Peter Raaymakers at 7:00 AM

While we're at it lets also implement a policy that implements a moratorium of 15 years on abutting roads when a road is expanded.

Stops the foolishness of expanding roads in the burbs, expanding car traffic, waiting till political from those drivers to widen or increase traffic on core streets.

Hey and lobby so that taxes factor in frontage as well as value, as that contributes to service delivery costs.