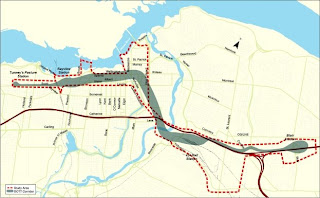 To offer a bit of a release from the constant strike-talk and political posturing between the City of Ottawa and the Amalgamated Transit Union Local 279, the City launched their website on the Downtown Ottawa Transit Tunnel (DOTT) today at Ottawa.ca/Tunnel. The image above displays the DOTT corridor (grey shading), as well as the study area (red dotted outline). There are five anticipated stations in the DOTT line.

The tunnel or tunnels will take one of two forms: Either single tunnels under two adjacent streets, or both tunnels under one street. Below are images of either possible scenario: 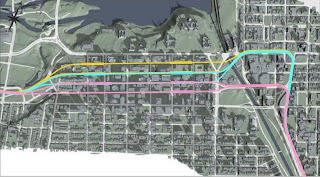 According to the above image (click to enlarge), which I captured from the Councillor's Briefing (.pdf), there appear to be three possible two-tunnel situations: Sparks/Queen (shown in yellow); Queen/Albert (in cyan); or Albert/Slater (in magenta).

The alternative would be running both tunnels under one roadway. Benefits to this approach would be that only one street would be disturbed, but the disruption would be more significant. The options are shown in the screen capture below: 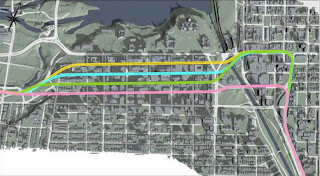 As you can see, the options outlined in the single-street option are Sparks (yellow), Queen (cyan), Albert (green), or Slater (magenta).

The majority of the options see the tunnel travel north to go under the Rideau Canal and along Rideau Street. The magenta option in both scenarios, however, most closely resembles the current Transitway, travelling under the Canal at or near the Mackenzie-King Bridge and stopping at the back entrance of the Rideau Centre (also beside the Department of National Defence building).

Considering how long it seemed to take to develop and accept the transit plan that this tunnel is a component of, the DOTT process is going to seem to move forward at lightning speed. A timeline of the upcoming events was available within the Councillor's Briefing, presented Dec. 16 to councillors and press:

Posted by Peter Raaymakers at 5:03 PM