UPDATE: Backlash against a mayor: The SFUO calls for new negotiations 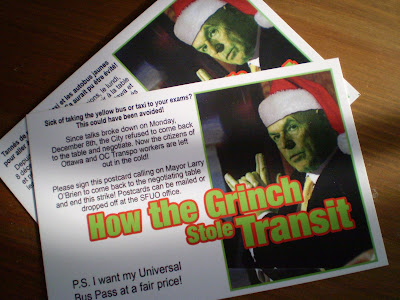 The Student Federation of the University of Ottawa (SFUO) is circulating these postcards in both English and French. They are available at the student union's front desk and are being sent to Mayor Larry O'Brien. Notice the polite reminder about the U-Pass at the bottom.

The text on the back reads (in English):

As a University of Ottawa student, I rely heavily on public transit to get to school and work daily. This transit strike has left students out in the cold, especially during exam season. I am writing you to ask that you go back to the negotiating table with OC Transpo workers (ATU Local 279). Let's end this strike and enjoy our holiday season.

UPDATE: In an interview with Public Transit in Ottawa, SFUO President Dean Haldenby expressed concerns with both the City and the union. At the end of the day, he said, the SFUO simply wants the strike to come to an end.

But when asked about some of the language used on the postcards pictured above, Haldenby said the SFUO has a lot of sympathy for the union's cause.

At the end of another post on this website, a commenter asked how students could support the union, given that it has disrupted many of their lives.

Haldenby was succinct in his response.

"The City is mistreating the union, just like they mistreated us with the universal bus pass," he said, referring to council's shelving of the U-Pass last month.

The story is a bit more complicated. As noted in another post, Amalgamated Transit Union international vice-president Randy Graham had this to say to CBC News before both the University of Ottawa and Carleton University began operating private shuttles:

"Most of the bus companies would never ever do anything that would be scabbing our members ... We'll have to deal with it if it does occur. We have to do the things that we legally can do. And we will do it."

That kind of comment left some wondering what might happen if the shuttles did run. But they commenced operations and nothing happened. Haldenby said the union understood where the student unions were coming from.

"We told them that their battle was not with the students, but with the city," he said. "We explained the very specific reasons that we needed to run the shuttles -- for exams -- and ... they gave us the go-ahead."

When asked about what might happen if the union hadn't given the students "the go-ahead", Haldenby said he didn't want to comment on hypothetical situations. He added that the union never threatened any action against the SFUO.
Posted by Nick at 12:45 PM

Why don't you ask Premier Dalton McGuinty to give Ottawa the same special treatment that he gives to The City Of Toronto. When the TTC workers strike he legislates back to work and to arbitration.

Good question, Andy, but McGuinty can't legislate Ottawa bus drivers back to work for some inter-provincial reasons; I've heard because OC crosses the border into Quebec. So it would have to be federal arbitration, and the city apparently has their reasons to prefer negotiation to arbitration.

Haldenby and the SFUO need to forget their loyalties to unions and give a swift kick in the ass to whomever is hurting students. Why not put both O'Brien and the union president on the card? Well that wouldn't be too solitary, would it?

Fuck solidarity, I want buses back.

(excuse my language, I cannot think of a different way to phrase my strong feelings of anger)

Should we be surprised by the President of the Transit Union?

I guess we only have to listen to the president of the Student Union ...

Interesting report - I saw similar cards at Carleton last week, printed by CUSA (the folks who brought you Shinerama-gate, the nationally broadcast Cystic Fibrosis controversy of several weeks ago).

Concur that SFUO's campaign was too one-sided - they should also have had cards to the ATU, with Cornellier as another Grinch. It's easy to dump on the Mayor and city councillors, but a bit more difficult to get the message into the faces of the unions as their offices tend to be much less accessible to the public.

Not sure why they are still going on about the UPass. Council approved the UPass during budget at a cost recovery rate.