Looking at high-speed rail between Ottawa and Toronto 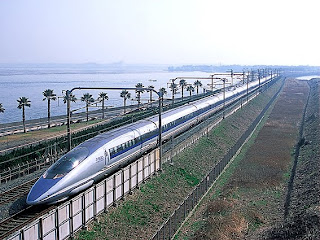 The S500 Shinkansen, a Japanese high-speed bullet train.
On Wednesday, Richard Florida--renowned author, professor at the Rotman School of Management, and director of the Martin Prosperity Institute--spoke with a number of editors at the Ottawa Citizen about the many possible benefits of building an intercity high-speed commuter train line linking Canada's political capital with her financial capital--Ottawa and Toronto. The Citizen penned an editorial about the meeting, and how much sense high-speed rail would make:

Toronto has the economic infrastructure, while Ottawa has the political infrastructure. No doubt Toronto bankers would like to be just down the street from federal regulators, while the public service often needs the expertise of those in business.

High-speed commuter rail is something we've talked about on Transit Ottawa before. Some of Florida's colleagues at the Martin Prosperity Institute wrote and article about it in the inaugural issue of the Journal of Public Transit in Ottawa, looking at the pros of linking mega-regions together with high-speed rail and how cities can integrate the regional line with their local transit systems. We've also looked at the benefits of high-speed rail, including expanded opportunities and reduced costs.
High-speed rail might seem a little foreign to most Ottawans or Canadians--isn't it a Japanese thing, where bullet trains have been around for decades? But that wasn't always the case; Canada was at one time a leader in the development of high-speed rail when we piloted the TurboTrain. A year ago, The Walrus took a look back on Canada's history with high-speed rail, why the country has fallen behind in the field, and author Monte Paulsen argues that Canada needs to catch up to maintain competitive in the world today.
And high-speed rail is gaining traction around the world. Japan has been shopping their high-speed rail technology for some time now, looking to export it along with their expertise in the field around the world. And in South Africa, a $3B project to link Johannesburg's airport with soccer stadiums for the 2010 World Cup finished just in time (despite many obstacles), and the Gautrain will be bringing soccer fans to games for the first kick-off. Closer to home, a coalition of pro-rail organizations in the United States recently launched the website FourBillion.com, looking to get the US government to invest $4B in high-speed rail development in 2011.
In Canada, there's certainly an appetite for high-speed rail. Decades have passed since the first report on a rail corridor from Windsor to Quebec City, which could certainly be a commuter train with stops in Ottawa and Toronto. The City of Calgary's 10-year economic development strategy suggests a high-speed rail linking Calgary to Edmonton and Fort McMurray. And Vancouver may be linked into a high-speed rail line linking the Pacific Northwest Corridor along the coast of Oregon and Washington states.
The bottom line? Rail is gaining popularity once again, after briefly falling out of favour in North America. The current administration in the United States is investing heavily in intercity passenger rail, and Canada would be wise to look into doing so, as well. If the governments of Canada, Quebec, and Ontario can come together to build a rail linking their biggest cities, the national, provincial, and municipal governments all stand to benefit.
Posted by Peter Raaymakers at 7:00 AM

came back wondering why we don't have it here.

Certainly it make regional tourism more attractive. Air travel aside from becoming more difficult due to security is also coming under heavy pressure for environmental concerns. And for business travel having offer service from downtown to downtown or suburb to suburb plus any combo you need is very attractive.

The list of upsides for high speed train is impressive.

But let's face it any planning that goes beyond the elected term is avoided like the plague. Not to mention a very large group of citizens seem only capable of supporting measures that benefit the car driver.

Another of the problems is we are so use to being oversold on a project that highlighting the numerous benefits just seems like more of the over promise under deliver we normally get. Then we still have to deal with people who decline anything they can't see a quick benefit to them.

It'll never happen. The biggest barrier is political. There is no way to sell this project to the rest of the country.

If it's going to happen, the lead has to come from the Ontario and Quebec. It's the provincial governments that have to step up to the plate.

But they keep hoping the feds will lead and pick up the bulk of the costs.


And so it will keep being dragged along until somebody finally wants to commit.