New York City isn't that far ahead of Ottawa 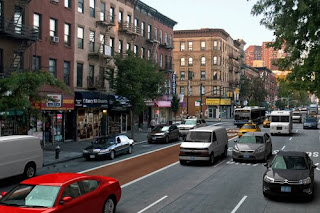 An artist's rendering of First Avenue's offset bus-only lane, painted terra cotta brown. © City of New York.
Or at least New York City isn't that far ahead of Ottawa everywhere. In fact, the city is just now beginning implementation of a bus-only lane along the east side of Manhattan, northbound on First Avenue from East Houston St. to E 125th St., and southbound on Second Avenue with opposite start and end points--basically, a significantly longer version of Ottawa's downtown Transitway along Albert and Slater streets.
From the New York Times:

Starting in October, buses will be granted an exclusive lane to speed up travel on those avenues from Houston Street to 125th Street, a trip that can last an hour and a half — the length of an Amtrak ride from Pennsylvania Station to Philadelphia.

Tickets will be sold at sidewalk kiosks, allowing passengers to board without stopping to fumble for change or a MetroCard.

Riders will be on the honor system: passengers will not have to produce a ticket unless asked. (A $100 fine awaits the dishonest.) And the buses will be equipped with three doors for quicker boarding and exiting.

Not at all unlike Ottawa's Transitway, in what the Times calls a movement towards "European-style rapid-transit buses" (I had no idea BRT was so cosmopolitan... ). To put the distance in perspective, the BRT lanes along Manhattan's East Side will be a similar length to the Transitway from Lincoln Fields to the Rideau Centre. Or, to put it in other terms, along Bank Street from a bit past Hunt Club right into Parliament Hill (and then back again, on some as-yet unconstructed parallel road): 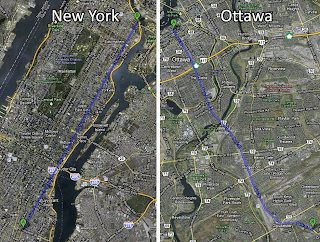 All this to say, although Ottawa doesn't have anything in the way of a subway system (at least not yet), the city is fairly well advanced in terms of our bus-rapid transit system. At least conceptually speaking.
Posted by Peter Raaymakers at 7:00 AM