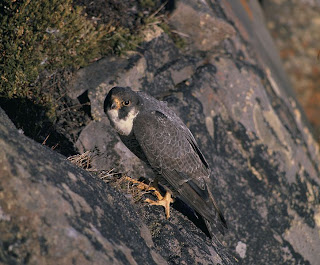 Among the many different effects the Downtown Ottawa Transit Tunnel (DOTT) and its construction might have, as published recently in the environmental assessment (which is available for perusal here), is the potential impact it could have on certain wildlife species-at-risk along the proposed route. One of those species-at-risk is the peregrine falcon.
The peregrine falcon was once an endangered species internationally, but since the pesticides which challenged their populations were banned, the species has rebounded very well. Breeding pairs have been seen in many major North American cities, and Ottawa is no exception: A recurring nest has seen pairs return yearly to the Crowne Plaza hotel regularly, and their sightings have been chronicled by the Canadian Peregrine Foundation.
Here are the comments made in the EA about the peregrine:

The peregrine falcon has nested in downtown Ottawa for several years and hunts birds throughout the City of Ottawa. During the summer months (June-July) the young peregrines leave the nest and test their hunting and flying skills near the nest site. At this time the young birds have been known to land on the ground near or on roadways and near office buildings. If a peregrine is found in construction zones, the Ministry of Natural Resources or the Canadian Wildlife Service should be contacted.

Although the peregrine is no longer endangered on the International Union for the Conservation of Nature and Natural Resources (IUCN) red list (they are classified as a species of least concern), they are specified as a species of 'Special Concern' by the Committee on the Status of Endangered Wildlife in Canada (COSEWIC) because pesticide contaminants continue to be found in the tissues of the falcons.
It's not likely that the peregrine will be overly effected by the construction of the tunnel, given how low it will be boring, although the vibrations may end up negatively effecting unhatched nests or even pairs looking for a place to nest. Also, Ottawa's urban peregrine population is not likely a significant portion of the species' overall population. Still, with all the talk about financial costs the city will have to deal with, it's at least worth mentioning that there are other costs, too.
Two other species were also brought up in the EA: The common snapping turtle and the milksnake. I'll discuss those two in the coming days.
Posted by Peter Raaymakers at 7:00 AM