NCC looking for input on interprovincial transit in capital region 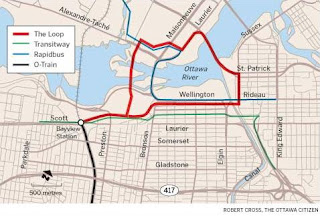 As a part of the National Capital Commission (NCC)-funded project looking into an interprovincial transit strategy for the National Capital Region to integrate Ottawa and Gatineau, a series of public consultations are scheduled to solicit the public's opinions on what form public transit should take between the two municipalities.
The press release is available here (.PDF), but the real important stuff is really just the dates for the two events:
The meetings are the fourth phase of the NCC project, which started in mid-2009 and is hoping to establish something new for Ottawa-Gatineau transit--by 2031, anyway. Some of the options that will be discussed at the consultations are increased bus service, surface light rail across the Prince of Wales, Chaudiere, and/or the Alexandria Bridge, and a tunnel through Ottawa--whether the DOTT, or a new one.
The preferred option, according to McCormick Rankin engineer Sean Rathwell as quoted in Metro Ottawa, is a light-rail loop across bridges to the west and east of downtown, with a tunnel under Ottawa. Similar, perhaps, to the illustration at the top of the page, taken from a May 2010 column by Randall Denley talking about 'the loop' (as it's become known).
The loop above appears to run across the Chaudiere and the Alexandria Bridges, but also runs west to include the War Memorial--it might make more sense to run the western leg along the Prince of Wales Bridge, in order to link up there, serve more of Gatineau, and also connect with the O-Train. But time will tell; if the NCC is taking the lead on this, the presence of federal support is virtually assured.
I hope to be at the Tuesday open house, and will post information I find on the site shortly afterwards.
Posted by Peter Raaymakers at 7:00 AM