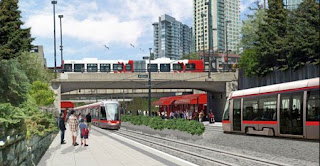 On Monday's Talk Ottawa program, transit was once again the topic of discussion. Notably, we discussed how affordable the $2.1B light-rail plan is for the city. Along with myself (Peter Raaymakers) on the panel were David Jeanes of Transport Action Canada and Rideau-Rockcliffe Councillor Jacques Legendre, with Ottawa-West Nepean MP and Minister of Transport, Infrastructure and Communities John Baird chiming in over the phone.
With his government's recent announcement of $600M in funding to support the transit plan, Baird's comments offered some strong insight into the meaning of the pledge. The most notable comment of his was that this funding is not necessarily tied to a tunnel; the government has given $600M for Ottawa to spend on this upcoming transit plan, but if they decide to revisit the tunnel (as mayoral candidate Jim Watson has suggested he might do), the funding won't necessarily be affected--the only time the feds would revisit it would be if the plan was altered so radically as to bring the bottom line below $1.8B or so. And although Baird wouldn't comment on municipal election issues, he did pose the question of why Watson (at the time Minister of Municipal Affairs and Housing) and the provincial government offered their $600M for a plan he now has questions about.
Baird also said that, although this funding represented the last of the Building Canada Fund Ottawa would benefit from, that doesn't mean it's the end of transit funding for the foreseeable future. He said that, once this phase is well on its way and the City has its next stage in the overall plan ready to go, he and his government would be more than willing to sit down at the table and talk about funding the project again.
For his part, councillor Legendre pledged his confidence in the city's plan without wavering. His exact words, in fact, were that this plan is "not even close to unaffordable" for the City to handle. He cited the contingencies built in to the current budget, discussed the potential ways to offset the costs of the plan (development costs, station partnerships with towers downtown, et cetera), and said that this plan was not only good for the city, but necessary.
Jeanes offered quite a bit of insight into a number of issues, from the cancellation of the 2006 north-south rail line to the reality of Ottawa's commuter system inevitably changing and the end of the no-transfer ride. What he was most passionate about, though, was that whether or not this plan is affordable isn't our most pressing question: He said that the 12km of light-rail track in this plan pales in comparison to the 120km of rail track his organization (Transport Action Canada, then Transport 2000) recommended back in 2003. He recommended the city find some way to better stretch the funding they've secured in order to get more kilometres per dollar.
A number of viewers called into the show, with varied comments or concerns. One memorable question was how the LRT as proposed would help people waiting at suburban stations (the example used was those at Baseline) who are forced to watch full buses drive right by them. The response, from Jeanes and echoed by Legendre, was that buses will now be able to turn around at the start of the LRT line (in this instance, Tunney's Pasture) and turn back instead of having to crawl through the downtown logjam, essentially doubling their capacity to move people.
Posted by Peter Raaymakers at 7:00 AM

I posted some thoughts on my blog:
http://firstsightottawa.blogspot.com/2010/06/notes-on-light-rail-and-auto-centric.html