Taking a look at high-speed rail 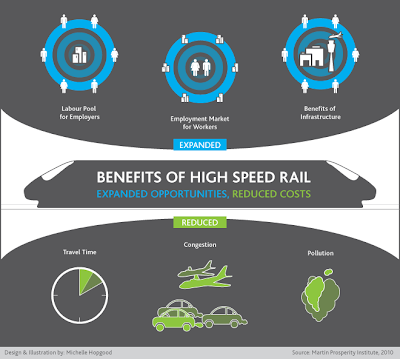 Those of you who've read the first issue of the Journal of Public Transit in Ottawa [.pdf] probably got a look at the Martin Prosperity Institute's white paper, "Making high-speed rail work for Ottawa". In it, authors Ian Swain, Patrick Adler, and Kevin Stolarick examined the potential benefits of regional high-speed rail line through Ottawa, and what the city would be well-served doing to maximize its efficiency.
On Tuesday, MPI's Insights blog summarized the white paper, looking at the opportunities it can offer, as well as the costs which it could reduce. As the did in their article in JPTO, however, they cautioned that it has to be done right if it's going to be done:

This should not be considered a blanket endorsement of high-speed rail or current proposals to build it. As outlined in the white paper, such projects must be built wisely, in the right places, with the right accompanying factors such as robust transit access and strategically sited stations. But to reject high-speed rail out of hand based on conventional cost-benefit variables ignores both the long-term shifts the economy is undergoing and the broader transformative effects of high-speed rail.

Ottawa and the region does offer a strong case for high-speed rail. A line from Quebec City through Montreal into Ottawa, and then onward to Toronto and Windsor, offers strong benefits to industrial, commercial, and governmental concerns, and would most certainly benefit the city and the region--if, as stipulated, it's implemented properly.
Posted by Peter Raaymakers at 7:00 AM

If a federal government wants to spend a gajillion dollars playing choo-choo train, I'd rather they spend that gajillion subsidizing the construction of new rail transit systems in Ottawa-Gatineau, Quebec City, Hamilton and a few other Ontario cities, and maybe Winnipeg, and extending the existing systems in Montreal, Toronto, Vancouver, Edmonton, and Calgary.

In the short AND long term it would be better for the economy and the environment than a white-elephant high-speed train (that would likely bypass Ottawa anyway).

Either way, Bombardier is happy, and that's really what it's all about, isn't it?