The Other Side: Hong Kong 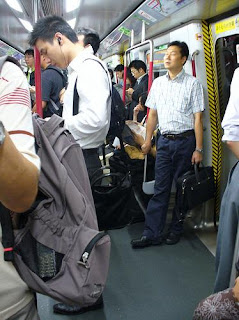 The first instalment of our The Other Side series, courtesy of Mel, is an account of public transit in Hong Kong. The system in Hong Kong, and you'll read below, invloves many different transportation types: ferries, buses, trains, taxis, mini-buses, feet, and bicycling.

Here's a quick run-down of the pros and cons of the system:

Pros: it’s fast, cheap, and generally effective except when it rains and all of Hong Kong fails to operate (kind of like how people from Vancouver react when there’s two centimetres of snow on the ground).

And now, in diary-format, is the story by Melanie, "Five days of Hong Kong transport":

Transit I didn’t take in these five days, but which I normally would use: the Star Ferry and a mini-bus, which often require you to yell at the driver when you want to get off the bus.

A huge thank-you to Mel for writing this account of HK transit. If any readers have experienced public transit in another city and can compare it to that in Ottawa, send me an e-mail at info@transitottawa.ca to discuss a submission.
Posted by Peter Raaymakers at 12:44 PM

Tags: Other cities, The Other Side