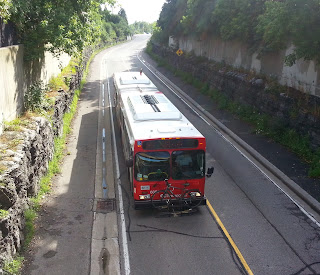 A few months ago, in the aftermath of a horrific sexual assault that began at Blair Station, I wrote about how badly the inadequate response of OC Transpo was hammering the utility's public image. It's also negligently and unnecessarily putting more riders at risk, and recent e-mails revealed by the Ottawa Citizen suggest that it was a public relations strategy to downplay bad news and promote good news that influenced the decision:


When a young woman was attacked by four men at Blair station on Aug. 11 and then sexually assaulted in a nearby secluded area, the public demanded answers about transit safety. But instead of speaking to news media, Transpo staff refused to talk for more than a week until they could present their safety improvement plans at a public meeting.

That presentation was OC Transpo's ten-point safety plan, which included very little of substance. Although changing the Night-Stop program to begin at 7 p.m. is an actual tangible change, the others seem administrative things, including the development of "an inventory of best practices" and the encouragement of more assault reports to gather data on where they happen more often.

Is that really going to make riders safer? Or even make them feel safer?

And the feeling of safety is a big concern. In a recent column, Metro's Steve Collins spoke to one OC Transpo rider about why she stopped taking the bus, and a lack of safety was at the forefront of her concerns. That is important in terms of public safety, of course, but it's also important in light of the continuing decreases in ridership on OC Transpo.

Instead of trying to downplay the significance of bad-news stories, OC Transpo and the City of Ottawa needs to address the underlying issues of safety on and around its buses and stations. The onus shouldn't be on the assaulted to snap a photo of the assaulter, as happened in a 2012 case of assault on an OC Transpo bus. A safety audit might also be a good idea, but OC Transpo seems convinced that they don't need to do one--despite the fact that it's been nearly a decade since their last thorough audit.

There are lots of things OC Transpo and the City of Ottawa could do to improve safety. They could increase the presence of special constables and even police officers on and around transit stations. They could retrofit buses with video cameras, instead of simply having them installed on all future ones. They could appeal to organizations like Hollaback! Ottawa for ideas on what might improve the situation.

The last thing they should do is try to ignore it until it goes away, because it's an issue that's not going anywhere.
Posted by Peter Raaymakers at 11:13 AM

I had to use the Lincoln Fields station around 8pm a few nights ago and I felt very unsafe. The first platform was deserted, it was unclear where I had to go to transfer (turns out I had to go up, down and along a ways to get there), it was dark and, as a woman, I felt uneasy. The station was not well lit, the signage was confusing and insufficient. Thank goodness there was a female waiting for her bus down in the heated shelter area who was very helpful. I should not have to rely on friendly female riders to feel safe. I agree wholeheartedly with your assessment of the situation.

Thank you for sharing this good write-up. Very inspiring! (as always, btw) https://royalcbd.com/product/cbd-oil-500mg/