Coffee and comfort for riders, extra revenue for OC Transpo 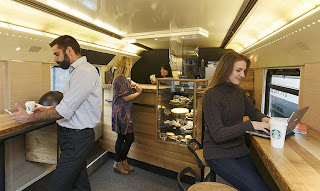 Some years ago, I proposed the idea of a bar car on Ottawa's trains as a way of recouping operating costs on the upcoming light-rail system--a bar car, of course, is a car on the train that offers drink service for riders. There's definitely a potential for revenue in the system, especially once Ottawa's LRT system grows out beyond the first phase from Tunney's Pasture to Blair.

But bar cars aren't everything; you can avoid the questions of licensing and still make money (potentially far more money) by operating a café car on trains--which is what happened earlier this month in Switzerland, where a Starbucks location recently moved into a train. From Fast Company:


"Starbucks locations already seem to be everywhere you look. But starting November 21, the company will take on a new frontier: trains. Starbucks, with the help of Swiss train company SBB, has converted a double-decker car running from Geneva Airport to St. Gallen in Switzerland into a fully functional Starbucks store, complete with wood tables, leather chairs, and, in another first for the company, waitstaff."

The train route in question, from the Geneva Airport to Saint Gallen, is a four-hour trip each way; the long haul and lower passenger count probably makes installing a café in a train car a slightly simpler proposition than, say, doing it on a Confederation Line train. But there's no reason why it couldn't be done in Ottawa.

There are plenty of questions about it, including how you'd have people line up and, after receiving their drinks, how you'd get them out of the way. Plus a café car raises the spectre of spills and resultant burns, a potential lawsuit waiting to happen. But maybe a discussion with Tim Horton's or some other local coffee chain would be a good way to start assessing the feasibility of the idea.
Posted by Peter Raaymakers at 7:00 AM

If you're running a line from Petawawa, Brockville, Smiths Falls or Rockland - to name several possibilities - this might be worth looking at.

Wow, this is very fun to learn. Have you ever considered marketing with articles to magazines? https://royalcbd.com/product/cbd-gummies-10mg/