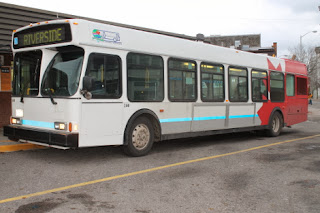 Anyone heading to Sault Ste Marie in the near future might recognize some of the buses running around the city, which bear a slight resemblance to OC Transpo's fleet--because they were recently purchased from the City of Ottawa.

As shown on Soo Today, the Orion VI buses retain the characteristic maple leaf on the back of the bus, but the OC Transpo name and other branding has apparently been removed.

Sault Ste Marie got a pretty good deal on the buses, too; they're expected to be in service for at least another five years, and the city offered Ottawa $80,000 for approximately 12 buses--roughly the same cost as refurbishing one of their existing Orion VI's would have been (Ottawa's buses had been previously refurbished, specifically with their front-end suspension design). It works out to a little over $6,000 per unit, and Soo city staff expect it could save the city as much as $650,000 in avoided maintenance costs (see page 142-3 of this very large document for more info).

According to Wikipedia, OC Transpo once had 140 Orion VI buses in its fleet, which were purchased in 1999. All have now been retired or sold off.
Posted by Peter Raaymakers at 7:00 AM

These were the first set of OC buses to be painted in the maple leaf design. Now, the symbol is becoming a permanent fixture on nearly all OC Transpo vehicles including the supervisors' cars.