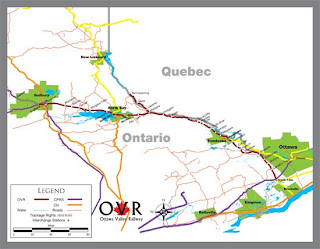 The City of Ottawa doesn't quite have a sterling reputation for rail transit. More than 50 years ago, the city scrapped streetcar service in the urban area in favour of personal automobiles and bus-centred transit. And in 1966, the National Capital Commission removed passenger rail tracks from Ottawa's city proper, relocating the city's train station out of downtown and to the southeast of the city.
Now, another potential loss for rail transportation in the area: The Ottawa Valley Railway, according to reports on CBC.ca, is in peril. The line, which runs from Sudbury to Smiths Falls, is owned by Canadian Pacific, and is currently out of use; they're planning on ripping up the tracks and selling the scrap metal for an estimated $50M, unless governments are interested in purchasing the line. Neither the federal nor provincial governments have stepped forward and publicly indicated any interest.
It's unclear what use the rail line could actually serve, though. It's certainly got historical value, as the Ottawa Valley portion of Canadian Pacific's cross-country rail line, but the line is out of service today, one assumes because it's not profitable to run trains on it. It may be a worthwhile purchase for the Canadian military, given that CFB Petawawa is right on the line, but they're not exactly in the business of running rail service. The chief value to governments would likely be as a strategic asset, as was noted in the CBC article; If CP is willing to sell the line for $50M or some similar price, that (plus associated refurbishing costs) would be a much more manageable price tag than trying to re-build it should the need arise in the future.
The O-Train marked a renaissance of rail transit in the city, even if it's taken some time for that to mature beyond that pilot project. Most city councillors are in favour of moving towards a rail-based transit system once again, though, and it seems the city is more friendly to it.
Posted by Peter Raaymakers at 7:00 AM

Can we really call the loss of row upon row of train tracks along the canal a "loss"?

Sure, it would be lovely to have a more central train station, but who would ever want terrible trains rumbling past the canal at all hours instead of the scenic driveway and park space we have now?

"Terrible trains" going through a few times a day would be a vast improvement over the 4 lanes of expressway and the Transitway that runs there now...


As to the post itself, the notion that it's unclear what purpose it would serve is puzzling, to say the least. From Arnprior westwards, the line, if connected to another line on the outskirts of Arnprior that comes from Ottawa, could serve as the basis of a commuter rail service through Renfrew County. We also do not know that the line is unprofitable. The big railways routinely get rid of profitable track because it's not profitable enough - that's why shortline railway now exist. The portion through Renfrew County from Arnprior as far as CFB Petawawa, when assembled with the other former CN trackage, could easily be put together to form a viable service. One of the problems with the way CP is disposing of the line is that they are refusing to consider partial sales. It's "all or nothing". This reduces the options for different entities to acquire the pieces they need for their own purposes (e.g. CFB Petawawa from Pembroke to the base, Renfrew County from Arnprior to Pembroke).

In addition to the above, the CP line from Pembroke to Mattawa (or indeed Sudbury) is the last remaining east-west rail bypass of Toronto. If, for any reason, there comes a need to reroute rail traffic not destined to Toronto around Toronto, we will not be able to do it.

We in Ottawa also have to admit a disturbing fact that relates to this line: virtually everything we buy that has come from elsewhere in the world has moved by rail for a significant part of its journey but virtually none of it arrived in Ottawa by rail. That's because we don't have container handling facilities in Ottawa, so it all has to be transferred to trucks in Montreal and Toronto and driven here. We're the largest city in the country not to have such a facility, and, indeed, smaller cities like Winnipeg and even Saskatoon have *two* of them. Were we to have some vision and appropriate investment in such a facility, that line all the way through to Sudbury would suddenly find itself economic.

Thanks to Michel Gréber and his spiritual heirs...and we've got to recover from these particular consequences.

Can we really call the loss of row upon row of train tracks along the canal a "loss"?

Yes. Rail and trains provide energy and activity, which were sacrificed on Ottawa's sacred NCC-sponsored altar of prettyism.

And what's "terrible" about trains?

I'll take trains over buses, any day, any where.


This was an outstanding piece of content. I really liked it. I'll be back to see more. Thanks!