As the preliminary planning work for Ottawa's light-rail transit plan chugs along, the Interim Geotechnical Data Report for the downtown tunnel portion was released this week, with a couple of snags that are reportedly forcing staff to consider changes to the plan.
The first of the potential changes, as reported by CTV Ottawa, it bedrock depth and poor soil quality around Campus Station. It might force the city to end the tunnel earlier than previously planned, bringing the Campus Station outside of it.
In the city's DOTT Planning and Environmental Assessment Study [.pdf, see page 13], three potential scenarios were outlined for the tunnel portal, leaving the door open for a shorter tunnel and Campus station being located outside of it. Should city engineers decide that the bedrock around the proposed station is too deep and the soil quality too poor, they'll likely choose the 'North Portal' option and have Campus Station at-grade. So that's not necessarily a huge change.
That scenario will naturally shorten the length of the tunnel--and perhaps fairly significantly, as much as 900m--but will it reduce the bottom-line cost of the project? The Ottawa Sun seems to think it could, in their story on the subject, but CBC interviewed city staffers who said it's not likely to bring down the cost.
The second, depending on the risk, may be more worrisome. The image below, a figure presented in the geotechnical report, shows the faults underground in Ottawa (click to enlarge): 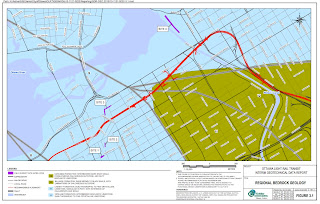 The set of faults in question are the Gloucester Faults, which cross the proposed DOTT alignment in three spots between Lyon and O'Connor Streets, but may in fact lie further east of where indicated on the map above (which is based on a Geological Survey of Canada regional geology map), according to the report. Although the fault lines are present, they are apparently inactive, and city staff told CBC that they aren't a major concern.
Posted by Peter Raaymakers at 7:00 AM

Needing my memory refreshed: how deep the underground stations need to be for DOTT purposes?