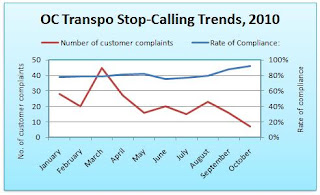 In what should have been expected as soon as the OC Transpo fleet began being retrofitted with the Next Stop Announcement System (NSAS), the rate of stop-calling compliance has hit a 2010 high of 92 per cent, and the number of complaints related to stops not being called out reached a 2010 low (at least by OC Transpo's own measures). Because not all buses in the fleet have been outfitted with the system, the rate of compliance hasn't yet reached 100 per cent.
It took a while, but it looks like the chapter may finally be coming to a close. All it took were repeated warnings from the Canadian Transportation Authority, as well as a couple fines from them for good measure.
Posted by Peter Raaymakers at 7:00 AM