Earlier in September, I posted a basic informational graph on OC Transpo ridership, since its first days in 1972. Just the simple facts: How ridership has dipped and risen over the last four decades.
Seizing on that information, frequent commenter on the site took the data a step further, comparing it to Ottawa's population--and graciously sending me the outcome. A note about the data: These graphs are from 1976, the earliest date census metropolitan area (CMA) was available, and they also only use population information for the Ontario portion of Ottawa (so Hull/Gatineau is not included in the population, although there may be riders from Hull/Gatineau affecting the OC Transpo ridership numbers).
First up is a comparative graph, showing the erratic and unpredictable trend in OC Transpo ridership (the blue line) compared to the relatively steady--and in fact steepening--population trend (the red line). The final significant dip in ridership is partially, if not entirely, due to the 2008-09 winter transit strike, but one fact is evident: The modal share devoted to public transit took a huge hit through most of the 1990s, and was slowly recovering--until the strike. 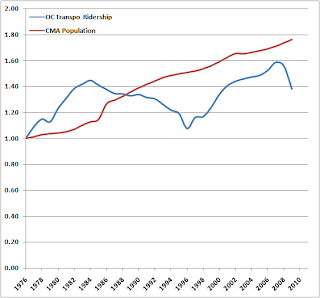 The trend of declining modal share is demonstrated, in some way, by the graphic below. Although this isn't quite modal share--it's the number of trips taken on OC Transpo per capita. Which shows what was described above: The 1990s were devastating for public transit use in Ottawa, and despite some improvements in the first have of the 2000s, public transit use per capita has drastically fallen off since its peaks in the first half of the 1980s. 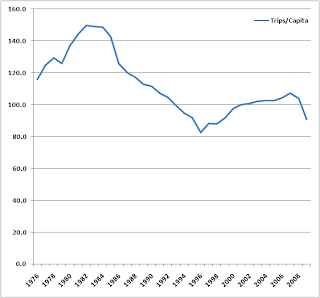 Thanks once again to WJM for the great work on these infographics. News reports have been positive in terms of ridership so far in 2010, but we won't know until the entire year's numbers are out whether the strike was a blip on the radar, or part of a greater decline.
UPDATE: Some astute comments on this post. Whether it be by some coincidence or not, OC Transpo ridership per capita's precipitous decline began in earnest around 1983, the same year the Transitway began operation. While it seems counter-intuitive, commenter David summed up reasonable conclusions to draw on the graph as such:

While the fact that ridership, when overall population is taken into effect, went down with the beginning of the Transitway is an undeniable conclusion, it certainly doesn't mean that the Transitway has made public transit less attractive to commuters and riders (although construction of the Transitway, and the delays and confusion that goes therewith, might have done so). It does, however, mean that the Transitway hasn't made public transit any more attractive to commuters potential riders, as evidence by the fact that they haven't flooded OC Transpo--and in fact the opposite, as commuters have in fact fled from it.
Posted by Peter Raaymakers at 7:00 AM

Very well done. I've made a graph like this myself in the past.

What your original graph shows is that absolute ridership peaked in 1984 - when construction of the Transitway began - before dropping for another decade during the period of Transitway construction; it wasn't until 2002 that it recovered to its 1984 levels. By that time, of course, the population had grown substantially so relatively ridership was and is still far below where it had been.

I don't expect Andy Haydon to publish these on his "transit facts" webpage...

It would also be interesting to know to what extent the "nature" of the ridership has changed. Has it become more or less commuter-focused over that time? Are there greater or fewer daytime/non-peak riders as a share of total ridership?

That was the first thing I noticed, too.

These numbers are probably lost to the mists of time, but I'd be very curious what ridership numbers were for the Ottawa Transit Commission. It'd be really interesting to see how the end of streetcar service in 1959 affected the figures, for instance. It also might be revealing to see how numbers changed through the autocentric post-war years...

It does, however, mean that the Transitway hasn't made public transit any more attractive to commuters

To be pedantic, we don't actually know that with respect to commuters. We know it to be true with respect to transit users generally, but not commuters specifically, since the data are for total rides. That's why I asked the rhetorical question about changes in the nature of transit ridership.

For example, it is actually possible that the Transitway did make transit more attractive to commuters - but only at the expense of even more riders at other times. It admittedly seems unlikely that commuter ridership would grow and all other ridership fall by even more, but it is possible. More likely is that both fell, but non-commuter ridership fell more.

One final pedantic point is that it is also possible that without the Transitway ridership would have fallen even more than it did. It's a "what if" that is impossible to answer on its own and it of course raises the question of whether light rail would have done better. Comparisons to other cities (especially Gatineau) mind lend a clue.

However, nothing negates the central point that the Transitway did not increase ridership in Ottawa overall.

Ive seen many articles like this before however, one thing has always bothered me. My thought is that, maybe the Transitway simpy slowed down a decline in Transit that would have occurred anyway. When I was going to urban planning school in Toronto,I discovered that the Metro level (Regional level) of government use to collect stats on car ownership in Meropolitan Toronto. Now I don't have similar stats for Ottawa but Toronto's stats showed, a huge increase in car ownership as the area recovered from the recession of the early 1980's. Around that time (1983-86), there was also a spike in the number of women working outside of the home. TTC stats showed a decline in ridership around 1983-84 but huge increases after this period. I have always wondered if a similar socioeconomic change led to huge ridership declines here as well.

Significant declines in ridership during the early to mid 1990s were by no means unique to Ottawa. Every large metropolitan area in Eastern North American experienced this. This suggests that, as one of the latter commentators noted, socio-economic factors (e.g., a severe recession) were at play. There was also the decentralization of population and economic activity, although this is a longer-term phenomenon. To a lesser extent, increases in real fares and reductions in overall transit service also had an impact. This had nothing to do with the Transitway.

In particular, I would strongly encourage you to calculate per capita ridership for Toronto, using its CMA population and the combined ridership of the transit operators in the area (TTC, GO Transit, Mississauga, Brampton, Oakville, Burlington and York Region). You would find that between the mid-1970s and 2007 (the last full year before Ottawa’s strike) the decline in per capita ridership in Toronto was substantially greater than Ottawa’s.

I would also note that the Transitway system was built over time in a number of phases. In fact, it continues to be built. Moreover, it takes years (decades in fact) for a rapid transit system to reach its full potential.

What would life look like without the Transitway? Well, we are about to find out as a key section of it (i.e., the section between Blair and Tunney’s Pasture) will be shut down during the construction of the DOTT project. Among other things, this will force buses from the East to use the Queensway and Nicholas while those from the West will have to use the Ottawa River Parkway or Scott Street. Key stations such as St Laurent, Hurdman, Westboro and Bayview will see dramatically poorer service, as many routes will simply bypass them. The congestion, the bypassing of key stations and the reduced reliability will hurt ridership. To offset this as much as possible, OC Transpo plans to dramatically augment the amount of bus-hours provided and this will increase operating costs by more than 22% (i.e., by $90 million in 2018). Even with this, the City still expects a ridership loss of more than 3%. This is discussed in detail on pages 24-25 of the City’s 2009 Tactical Plan for Transit Operations and Finances. Of course, the extra cost and the ridership loss would be much greater if the Southeast Transitway and the Transitway west of Tunney’s Pasture were shut down as well.

In summary, I think that the analysis to date has been simplistic and incomplete. It should be updated to reflect some of the points that I have raised.

Lastly, I have a technical question concerning the population data used in your analysis -- why the big jump in one year in the mid-1980s? Population growth in Ottawa is always steady year to year. I suspect that the population data is not coming from a single data set and the switch occurred in that particular period. Using Census data from Statistics Canada, I have a 62% increase in population between 1976 and 2006 (521,341 vs. 846,802). Your graph suggests a larger increase (70%-75%).

Lastly, I have a technical question concerning the population data used in your analysis -- why the big jump in one year in the mid-1980s? Population growth in Ottawa is always steady year to year. I suspect that the population data is not coming from a single data set and the switch occurred in that particular period.

There have been three areal definitions of the Ottawa Census Metropolitan area during the period covered by the graph. That is, the area defined as being metro Ottawa (Gatineau not included) has expanded on technical grounds, with attendant increases in population.

The graph uses the most recent definitions, but projected back as far in time as Statscan data is available.

The "jump" is one of those transitions from one areal definition to another.