2010 Election: Cullen on walking and cycling 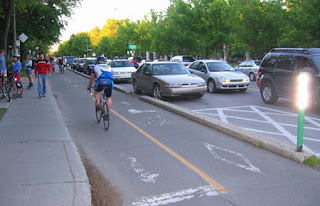 Over the course of the 2010 Mayoral Election campaign, Public Transit in Ottawa will be sitting down with as many mayoral candidates as are available, discussing their platforms and thoughts on transit in this city, and what they hope to achieve during their mandate, if elected mayor.
Walking, to most, is a natural extension of public transit: Although a bus or train can get you from near point A to near point B, you still walk a short distance (commonly referred to in the industry as the "last mile") to complete the route. Cullen sees that as an organic transition, and feels that by encouraging development around the transit system, walking becomes a

Walking ties in very nicely with the rapid transit plan, because we're encouraging more intensification along the rapid-transit route so people can walk to the LRT station, take the train, and walk to their place of work. We do have a pedestrian master plan to assist with that. One of our challenges, of course, is the weather: winter really interferes with pedestrian safety. We have more freeze-thaw cycles today than we did 20 years ago, because of the change in climate--Kingston's weather has now moved up here--so that's a challenge. But I see a symbiotic relationship between transit and walking.

Cycling, on the other hand, can take one of two roles in public transit: Either as start-to-finish transit form on its own, or as a complement to the bus- and train-based system. While serving as a city councillor, Cullen worked on a few different cycling projects, and he plans to continue working on them if elected mayor.

We have a cycling plan, which I had a hand in crafting, with $20M that we need to spend on this. I expect to see a pilot project for a winter-cleared lane, just to see how many cyclists we attract. Is that a good idea? You don't really know until you've tried it, but I think doing it as a pilot project, an east-west corridor ploughed in the winter, and if we have the takeup, we know it's a good idea; if we don't have the takeup, okay. We're back to what Montreal does: Montreal has dedicated cycling lanes with poles that they put in to demarcate the lane from the road, and then when the winter comes they take out the poles and use it for snow storage. And Montreal has much the same snow as we do, so that may be an option.

Whatever the city is able to do to promote (or even simply enable) cycling, Cullen sees that the growing popularity of the transportation method will lead to a change in the way the city manages roadways.

There is going to be competition for space. Obviously, you don't want cyclists' lanes to interfere with bus lanes, but you can't fit everybody on the same road. So some cars are going to have to cede space, either parking space or travel space, to permit dedicated bike lanes--whether it's on Somerset, or some other street. That's going to be a big cultural adjustment; the car has been king for so long. We do like to consider ourselves as a pro-cycling town, but we still have yards to go. The good news is that we are beginning to talk about dedicated cyclist lanes, whether it's Gladstone or Somerset or Wellington.

The status quo is going to change on cycling, and it's going to move towards providing more facilities. And it's the car that's going to have to make the concession.

I find it disingenuous of Cullen to talk about encouraging walking and cycling as modes of transportation when he voted in favor of the U-Pass, a project which will force student walkers and cyclists to purchase bus passes even if they make the environmentally friendly choice to live within walking or cycling distance of school. If you want to encourage people to walk or ride their bikes, don't tax them $290/year to do so.
Charlie Taylor
Mayoral Candidate

I'm not sure what it says about bicycle lanes or bicyclists but it appears the bicyclist in the photo going the wrong way.