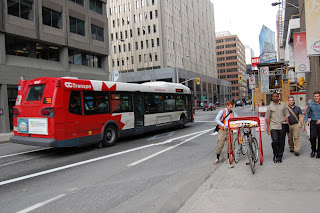 OC Transpo's 7.5 per cent fare increase in March 2010, coupled with mild weather and lower gas prices, have resulted in a $4.7M revenue shortfall for the transit utility due to less than anticipated ridership, according to a report in the Ottawa Citizen:

OC Transpo saw record ridership in December, when 8.4 million passengers were recorded. But ridership fell below budgeted levels after fares went up 7.5 per cent in March, says a staff report that’s to go to city council’s transit committee on Monday.

This year’s final ridership levels are expected to be down 3.1 per cent from budgeted levels, according to the report. Ridership in the second quarter of the year — 22.7 million passenger trips — was 6.7 per cent lower than budgeted levels, it says.

The good news is that the report also predicts a savings of $4.5M in savings, resulting in an overall operating deficit of around $174k.
The concern for transit advocates lies in the less-than-budgeted ridership levels, as much as it does the lost revenue. Given the other possibly contributing factors (gas prices and mild weather), it could simply be a temporary decrease. But if the ridership dip continues, it could be an indication that the higher-than-inflation transit fare increases have finally caught up to OC Transpo, and that some serious changes are in store.
Posted by Peter Raaymakers at 7:00 AM

Are actual ridership numbers up or down? (My guess is they would say they were up if they were, in order to spin it as a not-so-bad thing)

I've been saying for months that out of control fare increases would lead to less revenue. We need to bring fares down to an affordable level to create incentive for people to use transit.

yes you are correct. ridership is up but not as much as they bugeted and it is even higher then last year..
10 to 15 percent fair evasion which represents from 20-30 million in lost revenu a year they find it easier to raise the fare and collect from the people who pay instead of getting it from the free riders.