2010 Election: Cullen on the hub-and-spoke system 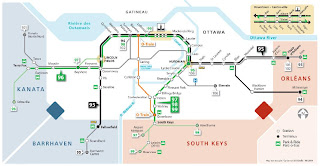 Over the course of the 2010 Mayoral Election campaign, Public Transit in Ottawa will be sitting down with as many mayoral candidates as are available, discussing their platforms and thoughts on transit in this city, and what they hope to achieve during their mandate, if elected mayor.
Something which all transit planners are concerned with are transfers: The conventional thinking is that more transfers = less riders, because riders don't want to get off one bus and have to wait for the next one. That speaks to the success of OC Transpo's express routes, where many suburbanites can take one bus from just about their front door to their office.
With Ottawa's current light-rail plan, though, that's going to change. Transferring from bus to train will be a reality. But it's a reality already, and mayoral candidate Alex Cullen thinks we're going to see even more of it as our transit system continues to grow.

Our last TransPlan eliminated some express bus routes, and those folks weren’t happy. In one sense, I don’t blame them, because they had a very convenient means of getting to work, but it was not efficient. Certainly from a cost perspective it’s not perspective—efficient for them, but not for the taxpayer. And we’re hitting capacity constraints in the downtown, and can’t take anymore. The city is growing, and we can’t take any more.

Although Cullen understands why the affected riders would be upset, he thinks that the failure has been on the city, and council needs to better communicate why these routes are cut, and why the city needs it.

We have to do a better job of showing people why we have to eliminate that bus route, that express route. [...] What my colleagues need to do is not try to hide from the reaction that we’re going to get, but anticipate it, be up front, and show the benefit of the alternative. This is a process where we need to engage people to help us to the transition to a better system. Once the LRT is in place, once 2017-2018 rolls around, people will be taking the bus to the LRT station and making a transfer. I think it will work, because once they get on the train, they can relax, it’s going to be comfortable, and there shouldn’t be anything slowing down their ability to get from A to B.

In the long-term, Cullen sees a positive example of people making transfers in Toronto.

I look at Toronto and the vast numbers of people that get off the GO-train and get on the subway and take the subway to wherever and then take the bus to their ultimate destination, there are millions of people who do that every day, and it functions very well. And people understand that this is a system that works. We’re getting to that stage.

This issue with transfers goes to our failure to convert to LRT well enough in advance. This is where Cullen is wrong in thinking the failure on the City's part is just a communications issue. We should have been thinking about conversion when the newly amalgamated city drafted its first Transportation Master Plan, but instead we got carried away with converting the O-Train.

I can see why riders would not be happy having to transfer from one bus to another bus. From their point of view, what's the point? Why not just keep driving the bus downtown? People can intuitively understand why they have to transfer from a bus to a train to go downtown and they can grasp the efficiencies and rationale of such a system, but a transfer from a bus to another bus, and one that is probably already full to boot? People are giving up a convenience without getting anything tangible in return, unlike with light rail where they will get a better ride. That is something that is very hard to explain.

If we had done things right and focused the 2003 TMP on conversion of the Transitway, we could have avoided the bus-to-bus transfer issue since the single-seat bus rides could have lasted until the day the light rail system replaced them.

Why were these routes there in the first place? Why were we catering to people in Kanata and giving them express routes which go from doorway to their office? We should never have allowed these routes to exist and forced these people to transfer at a logical transfer point like Baseline Station or Lincoln Fields in the west and Hurdman in the east.

These stations need to be suited as waiting areas for people to transfer to buses like the 95 and 97. There are still far too many express routes following the same routes as the 95 and 97 between Lincoln Fields and Hurdman.

People from the suburbs are going to be angry but these routes were never sustainable. We can't just have dozens of buses going on Slater and Albert to the suburbs.

I hope this is effectively communicated to the suburbanites.

In answer to Anon. # 1: It looked to me as if the designers were building - or trying to build - into OC Transpo's passengers' minds the sense of a "five-borough" city: Ottawa, Orléans, South Keys, Barrhaven
and Kanata. No idea what the "diamonds" mean, in or out of that context.