Is there an appetite for streetcars back on Sparks Street? 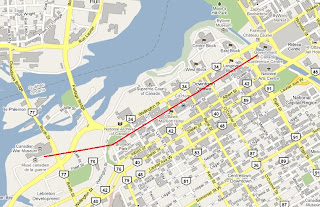 There is a grassroots movement afoot to bring back the City of Ottawa's historic streetcars, more than 50 years after the city tore up and abandoned them. The Ottawa Streetcar Committee talked with some transit decision makers in Ottawa to try and find a way for streetcars to be re-installed along Sparks Street, from the National War Museum to the old train station by the canal. From the Centretown News Online:

The National Capital Commission, Queen’s Park, and the city sat down with the Ottawa Streetcar Committee which aims to draw people back to the beleaguered shopping district by bringing back historic street cars and to reduce bus congestion downtown.

The group estimates it will cost $16 million to get the project on track, a capital investment that David Powers, a city economic development consultant, said would require some integration with the city’s transit plans.

As interesting as the re-implementation of streetcars along Sparks Street would be, I don't know what kind of contribution they would offer to the city's rapid transit infrastructure. They could, if done well, beautify Sparks Street and offer some more options for public transportation downtown aside from Slater and Albert Streets. If done as proposed (somewhat along the lines of the illustration above), the line could perhaps be a very good complement during the construction of Ottawa's downtown tunnel, and a street-level alternative when the tunnel is open. But they wouldn't likely be able to serve a significant portion of the city's ridership.
Posted by Peter Raaymakers at 7:00 AM

If this alignment was used for a loop I believe that it would be much more effective. If a full loop is not in the picture then having the line extended into the Byward Market or to the National Art Gallery plus having western end finish at the LeBreton or Bayview transit stations would allow offer a great increase in who would use it and how it would be used.

Does anyone truly believe it's going to be allowed to cut across the War Memorial?

Terrible idea. It would ruin sparks street and do nothing for transit. They want to bring streetcars back? Start with Rideau.