NCC willing to budge... no, not on the Parkway 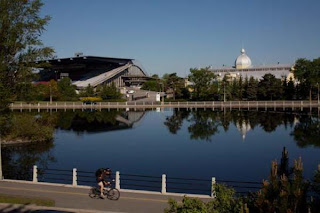 View across the Rideau Canal towards Lansdowne Park. Image © City of Ottawa.
According to reports, the National Capital Commission (NCC) would be willing to re-route the Queen Elizabeth Driveway, its scenic roadway along the Rideau Canal, in order to accommodate redevelopment plans for Lansdowne Park.
The move could be mutually beneficial: It allows Lansdowne Park some frontage on the Canal, enabling scenic pools, ponds, or fountains to be built off of it (ideas that have been bandied about in discussing the redevelopment plans), but it also offers the NCC more space to run their roadway instead of having to squeeze it between the park and the Canal. From the Ottawa Citizen:

[NCC's Executive Director of Capital Planning François] Lapointe said the area between Lansdowne and the Rideau Canal is "not that comfortable. It's very narrow.

"If we want to create a new experience, a new meeting place and activity space, it's clear we'll need to create a more comfortable zone in that area. That may include pushing the parkway further away from the canal."

The NCC's willingness to compromise, though, is also relevant to the city's transit planning. Although the city's current plan calls for building the rail lines right along the current Transitway, and thus along the NCC-owned Ottawa River Parkway, the NCC has been reticent to give their blessing to the idea. An environmental assessment is currently underway, examining a few different options for the western portion of the transit plan: the Parkway, Carling Avenue, and Byron Avenue, with perhaps still other possibilities.
While the city might pencil the Parkway as its preferred route--due in large part to the ease of installation and the lower price point--the NCC has other factors which they'll hold in higher priority. And while there are real benefits to moving around the Queen Elizabeth Driveway, there are few (if any) positive side effects to the NCC giving prime riverside land to the City for rail development.
It remains positive, though, that the NCC is willing to negotiate and compromise with city planners in order to find mutually beneficial solutions to these problems. Once the western corridor EA is released, we'll certainly hear more debate about these different options.
Posted by Peter Raaymakers at 7:00 AM