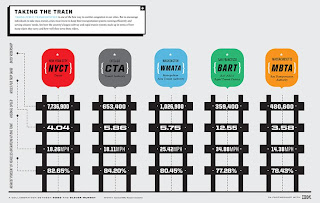 Very neat infographic on Good.is last week, comparing the United States' largest transit systems by the numbers in a head-to-head format. I can only find two of the four 2008 statistics to measure OC Transpo against these systems: Average speed, which was 16.47 mph (or 26.5 km/h), which would rank fifth of the six; and average daily ridership, which was 257,260 riders/day, lower than all the five but in a significantly smaller city (numbers from OC Transpo's 2008 annual report).
Of the US systems, particularly noteworthy was the stats on BART, the San Francisco Bay Area Rapid Transit system, which had the lowest daily ridership of the four, but averaged a higher speed and higher miles per trip than any other.
I mostly just wanted to post the link to the infographic, and express my desire to see something similar comparing Canada's transit systems--do any readers have the time, resources, and technical abilities to do one up? That would be amazing.
Posted by Peter Raaymakers at 9:18 PM

They should have thrown the TTC in there. It is the largest system operating today with a minimal subsidy (20-25% only). And for all its issues, is a remarkably effective and efficient transit system.

That average speed is pretty decent, given that OC Transpo accomplishes that mostly with buses (O-Train ridership is not that significant). It really demonstrates how effective BRT can be.

It really demonstrates how effective BRT can be.

Ottawa has BT, but not BRT.

Get rid of the artery-clogging local buses on the Transitway. Then you'll have BRT.