Ridership and regional employment by the numbers

OC Transpo's most recent quarterly performance report indicated ridership dropped by 2.2 percent compared to the same period last year. Whenever there is a fall in ridership, all kinds of theories are tossed around, most of them involving the transit agency: fare hikes, service cuts, bad drivers, etc. While some of these factors will have an effect of some kind on ridership, they do not largely explain variation in ridership levels. The report to the Transit Commission states another factor, unrelated to transit fares and service:

“Historically, changes in employment in Ottawa-Gatineau have explained approximately 80 percent of changes in overall ridership.”


Ridership seems to be closely tied to the number of people employed in the National Capital Region. These are quarterly changes; But how much does employment affect ridership year-by-year? I decided to crunch some numbers myself using annual ridership figures (1996-2012) obtained from various sources: OC's website, a data set in a much earlier article on Transit Ottawa, and monthly employment data of Ottawa-Gatineau region from Statistics Canada. The employment data goes only as far back as 1996. To calculate the annual number of employees, an unweighted average was applied for simplicity.

The data suggests a strong positive relation between regional employment and transit ridership in Ottawa: 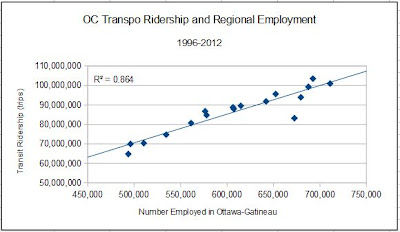 About 86% of the variation in ridership can be explained by the number of people employed. When the strike years (2008, 2009) are removed, the relationship is close to perfect: 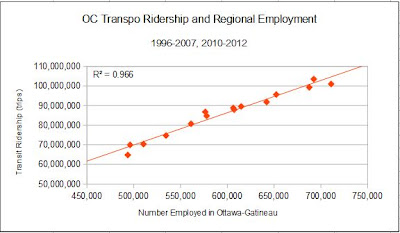 An astounding 97% of the fluctuation in ridership can be explained by regional employment since 1996, considering OC Transpo serves a small area of Gatineau. But the idea of employment, in general, being nearly 100% correlated to transit ridership is quite remarkable. As we can see, there's very little OC Transpo can do to improve transit usage that will have a similar impact as local job growth.

In order to determine the marginal effect of an additional worker would have on the number of OC Transpo trips, we'll use a least squares regression analysis. With all years included (1996-2012) in the regression, the number of service days affected by the 2008-09 labour dispute is added as a variable. Here are the results of this regression:

As expected, the coefficient estimates of employment and strike days are both statistically significant, even with only 17 observations. This model is a tremendous fit for the data as shown by the R-square of 0.956.

The 2008-09 winter strike is an obvious reason for the temporary drop in annual ridership. The estimate suggests an additional day, weekday or weekend, of the strike decreased 2008 or 2009 ridership by 428 835 trips on average when all other factors are held constant. The number is somewhat high because OC Transpo's figure for ridership on an average weekday in 2012 is 400 000, but appears to be rounded down though.

As for employment, an additional worker in Ottawa-Gatineau leads to an increase of 166 trips or 83 round trips on average, if all other factors are held constant. It's equivalent to nearly four months of transit travel on weekdays. If that person were to buy four monthly passes, that's somewhere between $395 and $488, depending on whether it's a regular or express pass, in annual revenue for OC Transpo. In this case, it's hardly much.

But let's say 500 people lost their jobs in one year and remained out of work the next year. If each worker bought four monthly passes on average while employed, OC Transpo would have lost approximately $197,500 in revenue, on average, the following year. Whether there is a large number jobs created or lost, it will make a noticeable difference in OC Transpo's budget.

Employment seems to have a stronger relationship with ridership on an annual basis than on a quarterly basis. During seasonal changes, other short-term factors emerge like school days, weather, gas prices, or a fare hike. None of them are as economically or statistically significant as the number employed, a variable rarely discussed among everyday transit users going to work.
Posted by Wes Chu at 7:00 AM

Correlation is not causation. This shows that ridership is tied to employment levels. No kidding. But what has OCTranspo actually tried to improve ridership?

One reason why I think OC Transpo ridership is so heavily dependent upon regional employment: The service is designed very much for the purposes of commuting--especially for public servants working at any of the local hubs (Tunney's Pasture, the two Gatineau campuses, 240 Sparks, DND HQ, and so on).

I'd be interested in comparing Ottawa's ridership-employment numbers to those of other cities, like Toronto or Boston or similar ones with more consistent transit service. Could shed some light on the foibles of our system here.

I think it's safe to assume that a rise in transit usage doesn't cause more employment unless the Rideau Centre was a hub for job openings (and there were none online) and a large number of job interviews were conducted there. If we were talking about service and ridership levels, the direction of causation would be a bit more ambiguous. But in this case, it's very difficult to see how ridership can be considered as an exogenous variable.


I suspect we'll see a very similar relationship with GO Transit in the Greater Toronto Area which is a service geared more towards the 9 to 5 commuters living outside Toronto city limits. The GO lines meet at a central hub in downtown Toronto at Union Station. OC Transpo's core and express routes also meet at a downtown area of high activity, the Rideau Centre. The route system in Ottawa has been very downtown-oriented for the past couple of decades and it's reflected in the numbers.