Confederation Line stations should be designed "with safety in mind"

During yesterday's Transit Commission's presentation on OC Transpo's safety initiatives (which came on the heels of a good deal of negative press surrounding the utility's response to recent sexual assaults), General Manager John Manconi brought up the importance of considering safety in the initial design of transit stations. As tweeted by David Reevely:

I've talked in the past about designing stations in such a way, including Lincoln Fields Station recently as well as Eagleson Park and Ride a couple years ago. Despite the obviousness of considering safety when designing and building these stations, it seems rarely executed proactively. That's a real shame, for two reasons:


With this in mind, it behooves the city to consider safety as the designs of Ottawa's newest transit stations are finalized--especially those within the downtown tunnel. If the most recently-issued concept designs of the Lyon, Parliament, and Rideau stations are accurate, then the city needs to re-assess their design in order to make them safer.

These conceptual images below show a "side platform" configuration for all three underground stations, with eastbound and westbound platforms separated by the tracks themselves (and a big fence/barrier between them). I'm not sure why the choice was made to use side-platforms; they tend to be somewhat less crowded/hectic for riders and offer the potential for more retail space, but I've yet to read justification from the city's side. 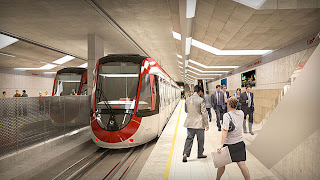 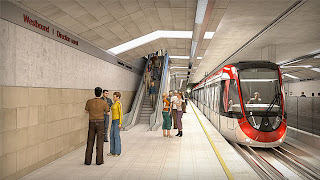 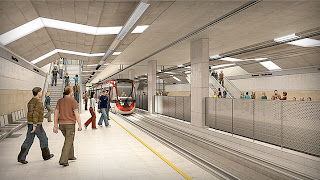 They all look pretty similar (a separate problem), and they're all designed with side platforms--which goes against the recommendation that all three stations feature 180-metre long centre platforms, which was made in the December 2009 Planning and Environmental Assessment study. This image, from that study, shows the difference:

As you can see, the centre-platform design features a much more open area for riders. It would definitely be hectic during rush hour, and may even be slightly confusing for infrequent users unless there's ample very clear signage of which trains go where. On the other hand, getting from the westbound to eastbound platforms is an easy couple of steps, as opposed to a couple flights of stairs.

Outside of rush hour, though, the openness of the centre platform is a boon to safety and security. More people are congregating in one area, which is safer (and is the motivation for OC Transpo's current "Night Stop" program). It's also easier for security guards to monitor, and sightlines are greatly improved so people can be vigilant and respond to or report any unusual activity. There are also fewer places for people to hide, lowering the risk of surprise robberies or assaults.

In short, it's a design that makes safety its first priority and doesn't unduly interfere with service in any way that can't be offset with proper signage. If Ottawa is truly going to design its future transit stations with safety in mind, opting for centre platforms would be a good place to start.
Posted by Peter Raaymakers at 7:00 AM

Only a minor comment, the platform length of 180 metres was dropped to 150 metres when the tunnel alignment was changed to Queen St. from the earlier cross country alignment. The tunnel right of way is also far shallower than the earlier design. Both changes were to save money and stay on budget. At 150 metres the platfroms will be the roughly the same length as a Toronto Subway or Montreal Metro staion. The platform lengths outside of the tunnel were kept at 120 metres and designed to be easily expandable in the future. Both tunnel and non tunnel platforms are abnormally long compared to other North American LRT systems. These lengths will help greatly expand the systems passenger carrying capacity.

The reason for having side platforms is the tunneling style: since one large tunnel is being dug for both tracks the trains will run next to each other as they enter the stations. Putting a platform in the middle may not make the station wider overall, but it does require wider tunnels leading away from the stations so the tracks have room to separate.

Ottawa's tunneling method contrasts with the use of TBMs like Eglinton Crosstown. When TBMs are used for each tunnel separately the space between tracks is already there so centre platforms become the cheapest option. Unfortunately the geology under downtown (rock) doesn't permit TBM use.