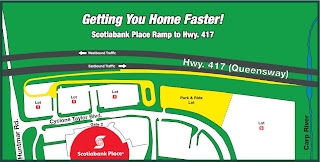 On a slow moving bus heading out of the Scotiabank Place parking lot, I often hear comments like “I should have drove to the game!” or “the city wants us to take the bus and this is what we get?” In the near future, we shouldn't be on a slow moving bus or hear those comments anymore at Ottawa Senators games.

The Ontario government, City of Ottawa, and the Ottawa Senators announced a new eastbound on-ramp to the Queensway from Scotiabank Place for buses. The ramp should save Senators fans and Scotiabank Place concert goers about 15 minutes since the ramp will give buses priority exiting. High-occupancy vehicles with two or more people have access to the ramp once buses have cleared. The City of Ottawa will invest $250 000 into the project, while the Ontario government will pay $500 000. According to CTV Ottawa, construction will start this fall and is expected to be finished in 2013.

Leaving Scotiabank Place after a Sens game can be aggravating for passengers on a bus, especially for those who are standing. The time to get out of the parking lot can be somewhere between ten and fifteen minutes. This on-ramp will be a huge improvement since it gives buses an exclusive exit out of Scotiabank Place. Also, the amount of time it will provide an additional incentive for car users to ditch their cars on game days and take the bus instead. A map of the on-ramp can be found here

As for the new Scotiabank Place Park and Ride spaces, there will be 100 new parking spaces. Public Transit in Ottawa's Peter Raaymakers wrote about the City reaching an agreement as early as September. The new Scotiabank Place Park and Ride will attempt to reduce the car volume at Eagleson and Terry Fox Park and Rides. At this time, there is no further information as to whether the new lot will be free, partially free, or Gold Permits only.
Posted by Wes Chu at 7:00 AM

That on-ramp will make a big difference for everyone at the game, I think: If it gets more people taking the bus, those who'd chosen to drive shouldn't have as much congestion to deal with.

No, if only they could get the belligerent drunks on post-game buses to shut up and sit down...

If "2 or more people" is the threshold for HOV, then this ramp is going to be of no benefit to transit vehicles whatsoever. The vast majority of private vehicles at a game will be entitled to use it, too.

@WJM: I got the impression that the on-ramp will be opened to HOVs after all (or at least most) buses had already left the stadium. I think that's what the 'priority access' to buses means.

I have a big problem with any public money going to a commercial enterprise, esp. under the guise of "public transit". 15 years ago Sens chose the "cheap" option and build an arena on cheap farm land closer to Stittsville than downtown. Now more public money is going to help them out? Doesn't sit right with me.

Jon D. brings up a good point about public money.

The Sens chose to build their arena away from downtown and if they really cared about their fans, they would have paid entire cost of the on-ramp years ago. I'm sure $750 000 wouldn't hurt them since they paid $5 million for Alex Kovalev.

I think that's what the 'priority access' to buses means.

I'd like to see that clarified, ideally in written form!

Very nice information shared by you. I was just searching this type of information and luckily I got it from your blog. I like your blog also. Keep it up.