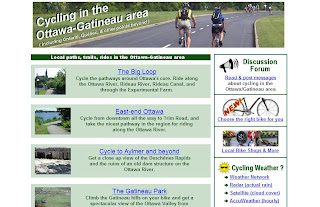 Attention cyclists in the Ottawa area, whether experienced or beginners: Ignore GoBiking.ca, an Ottawa-based cycling hub, at your own expense.

The website, managed by Michael McGoldrick, includes a huge number of links to local cycling resources, as well as a discussion forum and a few great rides folks in the Ottawa area can take--through Ottawa's east end, all the way out to Manotick, or for the more adventurous, even right out to Kingston.

Cycling is just another form of transit, and Ottawa's got some great paths which anyone can take advantage of.

EDIT: McGlodrick got back to me with a few notes on his website, and about his feelings about the state of cycling in Ottawa:


The basic goal of the web site is simply to get more people out on their bikes, whether it be for sport, recreation or transportation. It attempts to provide a context in which people can maximize the use of their bicycles and discover the pleasures and benefits of cycling. It is one thing to take a leisurely ride around the neighbourhood or to pedal few kilometres on the local bicycle path, but going out on a bike ride for a couple of hours usually takes a destination and a little planning. That’s where the articles and photos about what people can expect with various paths and routes comes in very handy.

It is worth pointing out that a 20 kilometre ride will seem like a lot for someone who is just starting off. However, most people quickly get used to riding such a distance, and before long they will be covering 30 kilometers, 40 kilometres, and so on. Once people are comfortable cycling 40 to 50 kilometres without giving it a second thought, it becomes a simple matter for them to start using their bikes to commute to work or to take vacations. (Organized bicycle tours for all ages is one of the faster growing segments of today’s travel industry.)

As for my opinion about cycling in Ottawa - it's true that the region is a great place for biking, mainly because of the excellent network of pathways that have been put in place by the NCC. To a limited extend, these are supplemented by multi-use paths established by the city. As a result, Ottawa likes to bill itself as "one of the best cities in North America for cycling". But I think it is living on its laurels .

For the most part, the City of Ottawa still treats cycling as a recreational activity. For example, the city makes almost no accommodations for people looking for a safe and convenient route for cycling into the downtown core. To see what's
possible, one only needs to look at what Montreal has done with its wide, well though out, and well signed bicycle lanes for moving a large number of cyclists through its downtown area. In Ottawa key bicycle paths remain snow covered
throughout the winter. Both Montreal and Toronto are committed to keep their main bicycle paths open during the winter. At one point in Montreal motorists started complaining that downtown bicycle lanes were being cleared faster than the roads. Needless to say, there are more examples of how Ottawa is quickly falling behind in sustaining itself as "one of the best cities in North America for cycling".

Posted by Peter Raaymakers at 8:30 AM