Ottawa Citizen columnist Ken Gray tore into the City's recent transit plans on Friday, calling them "lousy", ineffective, and overpriced. While I disagree with a lot of his points, he does make one good argument, with regards to the possibility of the NCC putting the kibosh on transit plans by refusing to allow light rail along the Parkway:

In addition, the final two plans put rail along the Transitway line from Dominion station to Lincoln Fields. That was a Transitway route of convenience using the Ottawa River Parkway. It was cheap. But no people live along it. There are no stops or residences. If the city were in the poultry business, it could pick up the flocks of Canada geese along the Ottawa River, but even that is seasonal given the migratory habits of the birds. The National Capital Commission would do us all a favour by not allowing the parkway to be used by light rail.

Because no one lives along the Parkway, it would be more effective to re-route the transitway along some more populated stretch. Below is a very roughly interpreted (and maybe impossible) potential alternative to the Parkway route by running the light-rail somewhere parallel to Island Park and right onto the Queensway at Carling. It could also make future extension to Kanata along the Queensway easier. Whether or not it is realistic to get the line onto the Queensway that quickly, it is a potential alternative that offers service to more residential areas and is therefore an idea to consider. 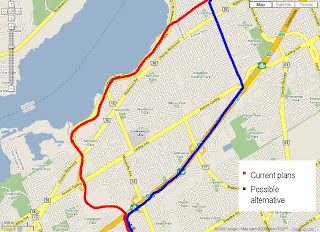 Posted by Peter Raaymakers at 2:55 PM