It may not deal directly with public transit in Ottawa, but the ongoing debate around an outdoor stadium is certainly affected by, and going to affect, public transit in Ottawa. There are two competing bids: The first to be announced was that of Eugene Melnyk, who is in the process of pitching for a Major League of Soccer (MLS) franchise to go into a to-be-built, "soccer-first" stadium on vacant land near the Scotiabank Place in Kanata. The second, announced on Friday, Oct. 17, is that of Jeff Hunt and the ownership group which was given a conditional Canadian Football League (CFL) franchise, pending a suitable football stadium in the city, to reinvigorate Lansdowne Park and the surrounding area. Both bids have pros, and both have cons, as well.

Ideally, should Melnyk be awarded an MLS franchise, that squad's stadium could accomodate any future CFL team, because quite frankly two world-class outdoor stadiums in this city would be superfluous. If Melnyk weren't to win an MLS franchise, his plans for a stadium would go by the wayside, and the city would likely proceed in consultation with the Hunt bid.

Immediately, given the city's planning policy directions to intensify development in the city's core, the Hunt bid should have a leg up on the Melnyk bid. However, the picture is not so clear. Here is a synopsis of the two bids, including the goals of each one, and the pros and cons associated with them.

Bring The World to Ottawa (the Melnyk bid) 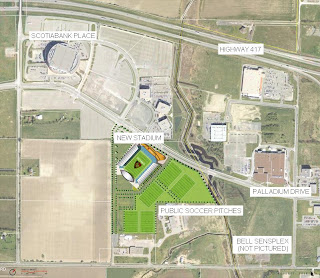 Eugene Melnyk's bid includes, obviously, a world-class soccer stadium which, as Melnyk said in a press release, "needs to be a sophisticated hosting venue providing our community with the ability to attract major international sporting events, outdoor concerts and festivals to the nation’s capital." To that end, the stadium would include an outdoor stage in the south-west end of the pitch, and seating around the other three sides. Parking for the stadium would, in all likelihood, piggyback on existing parking lots already present for Scotiabank Place, although it would be a bit of a hike and most spots would require crossing Palladium Drive to reach the soccer stadium. Given the incredible growth in Kanata as a result of Scotiabank Place's construction, it would be reasonable to assume further development as a result of a second professional sports facility in the immediate area. Seating would be designed to be between 20,000 and 30,000. 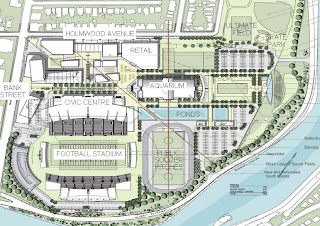 (Click image for larger version; click here for official website photo gallery)
The bid from Jeff Hunt, in cooperation with business leaders Bill Shenkman, Roger Greenberg, and John Ruddy, focuses on a world-class football stadium, convertible to rugby or soccer and concert venue, with surrounding re-development. Although the stadium itself is a large part, it would be surrounded with public soccer pitches, a skateboard park, an ultimate frisbee field, ponds, greenery, and a state-of-the-art public aquarium with walk-through plexiglass tunnels, and some retail and residential development (all in place of parking lots currently surrounding Frank Clair Stadium). As for the stadium, it would call for virtually complete retrofitting or rebuilding of the current stadium, focussing on increasing comfort in dressing rooms and player/performer accomodations, concessions, washrooms, and restaurants in the stadium. The field itself would be designed for football, but could be converted to soccer or other sports. Expandable end zones designed for an 'intimate experience' and permission from the CFL to consider natural grass turf would mean that an MLS franchise could, hypothetically, also use the stadium. Seating estimates are pegged at 24,000 to 25,000.

Posted by Peter Raaymakers at 10:19 AM

In my opinion, Hunt's bid is far superior. It's more sensitive to the needs of Ottawa as we move towards the future, and is in a far more ideal location. I posted more detailed thoughts in my blog, here: http://ottawaproject.wordpress.com/2008/10/18/lansdowne-live/

The Hunt Group's proposal is the best and I feel that the city should jump on it.