According to an article in the Ottawa Citizen, the city has decided to take advantage of an offer from the province to use part of the Queensway from the Transitway to Pinecrest instead of expropriating about 25 homes on Roman Avenue. At least for the time being. The houses, indicated in the photo below this quote from the Citizen article by a yellow box, are far from secure in the long-term:

"Roman Avenue got a reprieve yesterday and their homes are safe for now. But you can't say that the homes are safe until 2020," [Bay ward Councillor Alex Cullen] said. 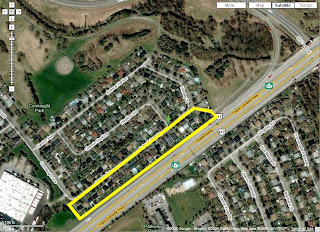 This move represents a temporary savings of about $100M, the story says, but it's basically just putting it off for the sake of the residents of Roman Avenue (to give them some security and, if desired, sell their homes to the city). Under the plan, buses will probably be running along a bus-only lane once they enter onto or exit off of the Transitway. In the image below, eastbound is denoted in blue, westbound in red. Both images are from Google Maps, with my colour-additions. 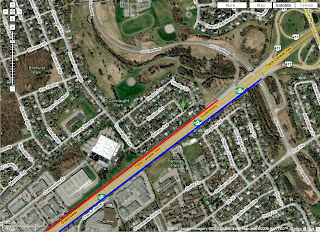 Are there any readers who are or know residents of Roman Avenue, or of land that has been expropriated for transit construction? What are your feelings on the subject?
Posted by Peter Raaymakers at 9:05 PM