As expected, Ottawa City Council approved the $4B-transit plan recommended by the transportation and transit committees, previously referred to as 'Transit Option Four". The vote wasn't even close, with 19 for the yeas and 4 for the nays. The option would include bus and light-rail routes as per the diagram below (click to enlarge): 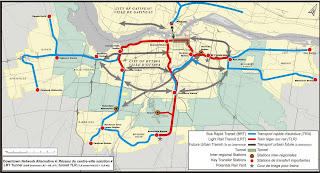 Ottawa Mayor Larry O'Brien was pleased with the decision, and especially pleased with the process. He said it met all four principles that he was striving for: honesty, long-term planning, value-added, and prudence. About the plan, O'Brien said that he is "glad that this city has decided to solve this city's transit problems from the core out."

Included in the decision are plans to set benchmarks for ridership and population density for suburban expansion of light-rail, as initially presented by Kanata North Councillor Marianne Wilkinson last week. Wilkinson voted in favour of the plan, encouraging other councillors to do so and move to get dialogue to continue and to have any "warts" the plan may have fixed in later discussions.

With regards to the benchmarks, Wilkinson told CBC Radio's All In A Day that they are ways to prove when it is fiscally responsible and justified to expand light-rail out to areas such as Kanata, Orleans, and Barrhaven. Kanata South Councillor Peggy Feltmate told the Ottawa Citizen that it might give the opportunity for expansion of light-rail to Kanata as soon as it becomes financially viable.

College Ward Councillor Rick Chiarelli voted against the motion, stating that he has yet to see proof as to whether or not the city can come close to paying for the plan. He cited concern over paying for the last plan, which was $900M, and wasn't certain how city would pay for this $4B plan. He made it clear he was not against the plan, necessarily, but that he needed more information before committing to it.

From here, City Council will move on to have continued dialogue about the timeline for the project, and how it will be funded. There should be discussion on these issues in the coming months.

Here's who voted in favour and against the transit plan, if you're interested:

Jan Harder (Ward 7, Barrhaven) was not there for the vote.

EDIT: I previously had Harder in the YEA voting, but (as reported in the Ottawa Sun) she was not present for the vote. Which explains how it was a 19-4 vote. Correct information is now presented.
Posted by Peter Raaymakers at 5:45 PM

Two things:
1) You stated that Mayor O'Brien liked the plan because it met his five principles, but you only listed four...
2) Will bus routes from outlying areas (Kanata, Barrhaven, Orleans, etc) stop at a rail station for people to make transfers or continue on into the city.
I'm glad the council finally made a decision but I'm not entirely convinced this light-rail plan will make things easier. I'd rather take my bus in and have it take 45 minutes than take a bus to a rail station for 30 minutes, wait for a train for 15 minutes then take the train to work in 6 minutes. I don't know that this plan will convince drivers to consider public transit. It doesn't seem any more convenient.

Thanks for pointing that out, there were only four that O'Brien mentioned (I've corrected the error).
As for the transfers, riders will take the bus to hubs and then transfer to trains. As far as I know, it will spell the end of express and rural express routes.
Your concerns are definitely valid, and a lot of riders outside the Greenbelt are concerned with having to transfer under the new system. I guess we'll have to see if the commute is expected to take longer.