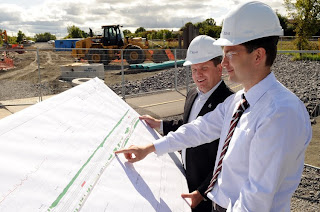 Photo courtesy office of Gloucester-South Nepean Councillor Steve Desroches
Construction began on the southwest Transitway extension through Barrhaven on Friday, September 18, 2009. The route will move buses from the existing Fallowfield Park and Ride, following along the VIA train tracks until just before Greenbank Avenue, when it turns south towards the Strandherd Park and Ride, goes underneath Strandherd Avenue and through the Barrhaven Marketplace (along an existing pedestrian pathway) towards new residential development in Chapman Mills neighbourhood (see map below). 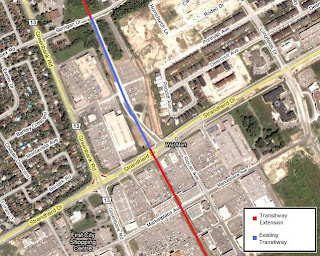 Google Map overlaid with new Southwest Transitway Extension route
The extension is intended to move commuters more quickly from the Fallowfield station into southern residential developments. One undesirable by-product of that is the new route will take many routes, such as the 95, further from residential developments along Fallowfield and Greenbank, but it does run through future developments between Longfields Drive, Greenbank Road, and the train tracks.
The construction is scheduled to be completed by the spring of 2011. Undoubtedly, the most interesting component will be when the route tunneling underneath Strandherd Avenue. It will certainly be complicated, considering Strandherd at that point is four automobile lanes wide.
For more information on the Southwest Transitway Extension, check out the city's official public consultation page.
Posted by Peter Raaymakers at 8:00 AM

Your map is wrong at Strandherd. It doesn't angle off to the southeast to cross Strandherd at the current crossing. Rather, it keeps going in a straight line underneath Strandherd and goes into that currently grassed corridor through the parking lots. The current angling-off was done deliberately to facilitate the future tunnel construction so that the transitway wouldn't have to be temporarily relocated during construction.

Thanks, David. I had intended to update the image after I had the route clarified, but I guess I didn't upload the new one. It's been revised, and thanks again.