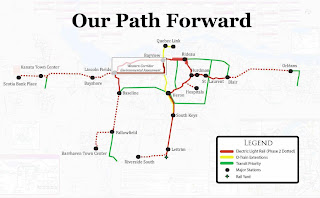 At the Gladstone Theatre Monday morning, Capital Councillor Clive Doucet and Kitchissippi Councillor Christine Leadman presented their amended transit plan in front of around 250 people. The plan focuses on building light rail transit through more of the city (out to the suburbs) on a much shorter timeline (within 10 years) than in the city's current plan, and proposes using Carling Avenue as the western corridor of the transitway rather than the Ottawa River Parkway. Also present was transportation consultant Morrison Renfrew, who has been outspoken in his support of running light rail down Carling Avenue and presented a feasibility report of the idea. According to Doucet, the entire plan, including rail to the suburbs, could be completed within ten years.

As the top image (which you can click on for a larger version) indicates, the plan is broken down into two phases, one within the first five years and the other within ten years. The first phase, which Doucet states could be completed within five years, would include:
Doucet stated that the logical starting point would be along Carling Avenue, while environmental assessments are being completed as necessary for the downtown tunnel. This would allow construction to begin immediately, rather than having to wait for the results of any environmental assessments.

The second phase of the project would bring light rail to the suburbs, and would be completed within ten years, according to Doucet. It would include:
According to Doucet, the new plan is not an alternative to the current plan; rather, it is an amendment that falls within the parameters outlined under current council directions. As a result, it would require a simple majority of Council's vote to be passed, rather than the 3/4 necessary to begin in a new direction.

Councillor Leadman led the discussion on the economics of the plan. She suggested that by redirecting funding from other areas that would become unneccessary under a light-rail infrastructure (i.e. bus garages, new buses), the Light Rail Now! plan could actually provide over $1.3B in savings over the current transit plan.

As for the alternative of running the western corridor along Carling Avenue rather than the Parkway, Renfrew was very optimistic that it was not only feasible, but more beneficial than the Parkway. He highlighted the "multiplicity of activity centres" which would make it a 24-hour transit line, rather than simply a commuter line--as he suggested rail along the Parkway would be. Renfrew proposed a series of measures to allow light-rail to run at grade, rather than underground, along Carling Avenue from Lincoln Fields to the Carling O-Train station, and then following the O-Train line to Bayview Station and heading downtown. Renfrew's biggest concern was with the intersection of Carling and Woodroffe, at Carlingwood Mall. He suggested that the intersection is poorly planned as it is, and recommended that it should be re-designed to allow for better traffic flow--during this re-design, the specifics of running LRT through the intersection could be determined.

Several concerns with the plan were raised during the question-and-answer period. One came from Bay Councillor Alex Cullen, who questioned the financial data that was presented and whether or not the Carling option was as realistic as it was presented. Another concern came from Ottawa Sun reporter Derek Puddicombe, who questioned the ability of Doucet and Leadman to prove to more than half of their fellow councillors that this plan is far better than the current one, and is also feasible.

All in all, the presentation offered another option to consider when Council makes their monumental decision this coming Wednesday. Much of the documentation is available on Doucet's website, and I've contacted Renfrew with a request for more information on his part of the presentation--which I will make available should he return my e-mail. What do readers think of the idea?
Posted by Peter Raaymakers at 4:13 PM

One thing that stands out to me in the Light Rail Now! plan is a stop on wasting money on more buses and bus infrastructure.

If I could give City Council and City Hall (staff) one directive for our Transit planning, that would be it: Stop wasting our money on buses; not one penny for new buses or bus infrastructure, get rid of existing buses as soon as there is rapid light rail to replace them.

Rapid light rail is both more efficient and scalable than bus as a primary mode of urban transit. It also has a much smaller environmental, health and quality of life impact than buses. The total cost of ownership (TCO) of light rail is much less than a comparable bus system. These are facts borne out in cities and health studies around the world.

How is it possible that our nation's capitol is stuck in the last century on transit? Let's get on with intelligent plans for rapid light rail.